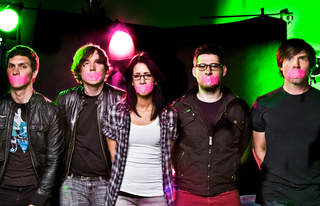 The Orkids are an electro-rock band out of Athens, Georgia, founded in late 2008 by guitarist Adam Monica and singer Sandra Gallardo. The group recently transformed from a studio project between Adam and Sandra to a five-piece rock outfit comprised of veteran Athens musicians. With the addition of Joshua Schwarber (Keyboards), Brad Lee Zimmerman (Drums), and Sheldon Wolfe (Bass), The Orkids combine danceable beats and edgy guitar/synth lines with catchy girl/boy vocals to deliver thrilling, infectious pop. In late Summer of 2009, The Orkids completed their first EP entitled “Paper Dolls.”

The Orkids Paper Dolls EP: VIP Bonus Album Digital Download by PasteMagazine.com: December 2009
The Orkids formed in Southern music hotspot Athens, Ga. in late 2008 and expanded into a five-piece in 2009, just in time to release their debut EP. Lead vocalists Sandra Gallardo and Adam Monica...
The Orkids: "Paper Dolls EP" Review by The Flagpole: Jan. 13th 2010
The debut EP from this local group is polished and propulsive, a dance record that slides across the spectrum from pop to electronica. When founding duo Adam Monica and Sandra Gallardo first posted...
The Briefcase by Blur Magazine-March 2010
The debut EP from the Athens band The Orkids is one catchy pop album. Each one of its five songs could easily be a radio hit. The combination of catchy vocals and exhilarating guitar riffs makes...
The Orkids: Artist of the Day Jan. 26th, 2010 by Athens Blur Magazine.com
The Orkids have burst onto the Athens music scene with a fire in their hearts. It seems that in every publication in Athens – Blur, Flagpole, Jake to name a few – there they are. And good for them...
p
A
n
E
F
Song Title by Artist Name