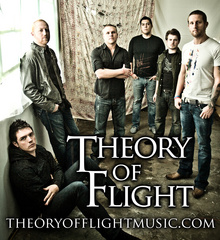 Las Vegas’ most musically captivating new band is taking back the alternative rock scene with their cleverly delivered lyrics and electrifying melodies. In just a few short months they have worked their way up through the Las Vegas music scene to become one of the most talked about and sought after bands in an extremely competitive market. In August of ’07, Songwriter/Guitarist Vince Casas teamed up with the powerfully dynamic talent and stage presence of Vocalist Beau Hodges. The two of them rolled up their sleeves and sought out some of the best musicians from across the nation. They started out at home and included their long-time friend and local outstanding bass player Joey McMahon in the band. They then acquired a drummer from the Seattle,WA area named Tyler Williams. They then made the decision to add a long time professional and internationally touring artist named Stephen Goodrum. Not long after John Colombo, a young studio musician/engineer from Nashville, joined the ranks to complete this powerpacked group. In less than 1 short year 'Theory of Flight' has acquired local, and national media attention, radio accolades, and major label consideration. Because of how fast all this fell into place, 'Theory of Flight' made the decision to record, produce, master and cut their own 6 song EP titled "A Brilliant Display". With this new sound they are beginning to take hold of the music industry in ways nobody thought possible. Coming soon to a rock venue near you! Theory of Flight! My Pad (Hometown): Las Vegas

by X-Poz Magazine "great article"
The name Theory of Flight may project thoughts of planes, birds, and even a feather blowing in the wind. This band is anything but something that tangible. Their music is clean and together; their...
2nd place at Nationwide Battle of Bands by Vegas Rocks Magazine
this is a cool article from Vegas Rocks magazine about our second place win at Indie Rock Wars a Massive nationwide battle of the bands.enjoy Theory of Flight
by Aaron Thompson Las Vegas Weekl
MoreFrom the Calendar Theory of Flight @ Wasted Space, Oct. 21, 10 p.m. Band Guide Theory of Flight Slow to Surface Cherry HillTheory of Flight is three things at least: how birds and planes...
p
A
n
E
F
Song Title by Artist Name