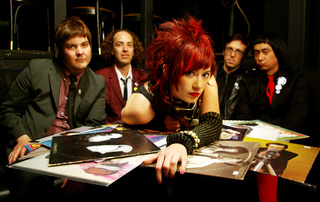 Blasting out of San Francisco, The Pleasure Kills play powerpop!

The five week tour in support of the new "Bring Me A Match" album (released June 2010 on LP and CD by Polypore Records) brings the band to all parts of the U.S. in July and August 2010.

The band supported Kepi Ghoulie (ex-Groovie Ghoulies) on a full national tour in Summer 2009, and toured the Southwest in Summer 2008. They played Insubordination Fest in Baltimore in 2009 (Dead Milkmen, Dilinger 4, Pansy Division, etc.), the Wild Weekend Powerpop Fest in Austin in 2008 (The Boys, Pointed Sticks, Nikki Corvette, Gentleman Jesse, etc.), and the Slabtown Bender fest in Portland in 2009 and 2008 (Mudhoney, Jack Oblivian, Pierced Arrows). They've shared the stage with bands including The Avengers, Davila 666, Jay Reatard, Riverboat Gamblers, Nobunny, The Rantouls, The Girls, The Cute Lepers, Harlem, Head, Earthmen And Strangers, Lords Of Altamont, Slow Club, Nous Non Plus, and The Tranzmitors.

Check them out at http://www.myspace.com/thepleasurekills

The Pleasure Kills have a simple setup! They need one microphone for lead vocals, and one for backing vocals. Instruments are played through three amps: one for guitar, one for bass, and one for keys

from Smashin' Transistors by
There's that something going on here that would've had Rodney on the Roq playing this on the radio for weeks on end back in his early 80's heyday
from Seven Ten Twelve by
This is pop music at its finest ... pure of heart, getting stuck in your brain ... a refreshing alternative to the crowded and muddled music of the current American underground ... A definite must
from DiSCORDER by
Lydiot's vocals-how she can simultaneously channel great female pop divas of the past like Martha Davis of the Motels, Jill Kossoris of the Shivvers or even Debbie Harry without making it sound...
from Lucid Culture by
sounding a LOT like vintage Blondie ... This is the kind of song that you find yourself singing on the way to the train ... Awesomely catchy
from Now Wave by
It seems I've discovered my favorite new band ... a must-have record for anyone who loves powerpop ... a la Josie Cotton circa Convertible Music ... Both songs are fantastic
from Terminal Boredom by
you can't deny that this one is a hit ... Nikki Corvette-y ... All you neo-power-popsters out there should dig this
from Maximum Rock N Roll by
This is absolutely pure power pop goodness, complete with sticky sweet female vocals. This is what heaven is like, I am sure of it.
from Oklahoma Gazette by
Like Blondie, The Go-Go's and Joan Jett ... The Pleasure Kills deliver a pop-perfect combination of bubblegum hooks and punk grit