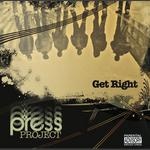 Blending hip-hop, soul, jazz and funk with an eclectic and poignant tongue twisting lyrical style, the seven members of The Press Project circulate massive amounts of physical and musical energy in a supercharged live performance spectacle.

The Press Project has arrived as a force on the underground music scene with performances alongside acts including The Roots, Soulive, Robert Randolph, George Clinton, Slick Rick and more. The band cemented its status as an act to watch at the 2008 Bonnaroo Music Festival in Manchester, TN where it garnered serious attention and was one of only six hip-hop acts invited to play. The band’s debut album ‘Get Right’ was one of the top added albums on the CMJ charts in January 2008 and climbed into the Top 40, ranking as high as number twenty nine.

The Press Project is a movement, equal parts instrumentals that make people get up out of their seats and messages that make them think and believe in music again. The sounds and lyrics appeal to everyone from hip-hop heads to jazz and soul junkies and the average listener of any age. As guest vocalist Iyeoka states on the album, "These are the voices you believe in...This is The Press y'all."

5 mics
set up for Keys, Bass, Electric Guitar and Drums

Press Project turning into a headliner by Boston Herald
If you track the entertainment schedules of Boston clubs such as Bill’s Bar, Oliver’s and Harpers Ferry, you might be wondering exactly who - or what - is the Press Project.Short answer: a...
Meet the full-on Press by Foster's Daily Democrat
I don't tend to believe that things happen for a reason. I believe in a world of random collision and happenstance, lesson to be gleaned later. I'm told it's not the sexiest belief system. But...