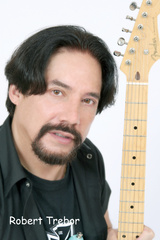 Robert Trebor is a singer songwriter based in Central Calif. He recently opened for Foghat in July of this year.Robert has a unique sound that has Rock,funk and blues influences.Robert Trebor has recorded a new Cd this year and is currently produced by world famous guitarist Stevie Salas. Stevie has performed with Rock greats like Mick Jagger, Rod Stewart, Sammy Haggar. he has worked with Justin Timberlake, and is the musical director for american Idols Daughtry, David Cook, and Jordan Sparks. the New Cd features Stevie Salas on guitar,Jara Harris on bass( american idol house band, Cameo, Jordan Sparks, Moris Day) Ron Blair ( Tom Petty and the Heartbreakers) Drums Bucket Baker( Macy Gray,Kenny Loggins,Boz skaggs) Bernard Fowler on backround vocalist Bernard has recorded with the Rolling Stones,Ozzie Osborune,Alice Cooper,Rod Stewart, Charlie Watts( album)Bernard is one of the most recorded and sought after backround vocalist in the industry. to

We are a five piece band, looking to play in California. Any city within driving distance of Fresno, Ca. We do a one hour set of original material but can do one and a half hours if needed. We do not carry our own sound equipment.