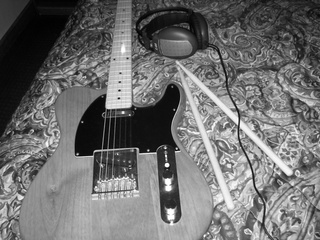 This is the story of two brothers who embark on a journey that will unleash their creativity and reveal their true identities; The Runwayexit.
Hailing from Oklahoma, The Runwayexit is a band born from a desire to make great rock and roll while simultaneously delivering a lyrical realness and honesty that is refreshing in today's rock scene. Consisting of brothers Terry Farris II aka bOoGiE, age 22, on lead vocals and guitars, and Jordan Farris aka Joe, age 16, on drums, The Runwayexit is a unique combination of hard, melodic guitar driven progressions combined with a possibly more darker and straightforward vocal approach than what is typically expected. Classifying themselves as rock/alternative, The Runwayexit's unexampled sound nods to many different genres of rock while maintaining a surprisingly consistent approach. The two brothers cite a wide variety of influences ranging from bands such as Chevelle, Anberlin, Linkin Park, and Blindside to older bands such as The Eagles and Boston.
Although only existing since early of 2007 as The Runwayexit, the brothers have performed together virtually all of their lives with various different band members and band names coming and going. The one thing that has remained consistent throughout was the special musical bond between the siblings that continues to result in a musical tightness that is appealing to music lovers everywhere.
The Runwayexit's current project, the "Inside EP", (available for download now) contains four tracks that gives the listener a good impression of what the band's overall sound is like. Tracked, produced, and mixed on a limited budget in bOoGiE's home studio, the brothers were determined not to let the limitations of money or equipment get in the way of making an EP that provided an enjoyable listening experience. The songs on the album were written and/or co-written by bOoGiE and thus are very real and personal for him to perform whether in the studio or on the stage. Most of the band's songs deal in one way or another with providing hope in an often hopeless world. The band's desire is to bring that hope to people through their music and performance and thus are currently booking dates in support of the EP. In the end, The Runwayexit is a honest band who rocks hard and will continue working to bring their music and message to the world.