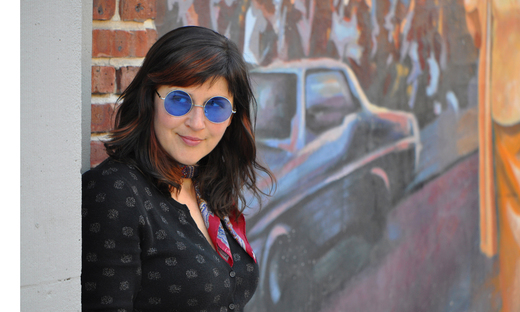 WHO: Philadelphia musician Katie Barbato and friends
WHAT: Barbato was granted permission in October 2010 from The Millay Society to write, record and
release "The Millay Tapes", a compilation of 12 original songs set to the poetry of the great Edna St. Vincent Millay.
WHEN: Official record promotion winter 2012.

Barbato began writing songs to Millay's poetry in 2006 after spending an afternoon in an antique bookstore in the ocean town of Kingston, RI. "I was thumbing through the poetry section and her name sounded so alluring to me. I read a poem entitled " Exiled" and could immediately hear the tune. I wrote 3 songs over the next month."

Taking Millay's ethereal, sometimes complex, sometimes simple, and sometimes humorous words and encapsulating their mood in music is not an easy task, but for Barbato, the connection she felt to Millay made the evolution an easy one.

“I know I am not the first person to have fallen head over heels for her poetry and feel captivated by her presence on this earth. It makes sense that this inspiration landed me writing an entire album to her poetry."

"The Millay Tapes" was performed in its entirety on October 22, 2011, at a private event held at the legendary Sigma Sound Studios in Philadelphia and had since been distributed digitally through Itunes, Cdbaby.com, Amazon.com and other outlets.

Barbato, who has become a Philadelphia staple since moving to the city in 2003 and founding Lickety Split's open mic on South Street, drew on her extensive network of amazing musicians, to be featured on The Millay Tapes. The featured album guests include Michael Ronstadt, Kurt Unterkoefler, Dan Collins and Danielle Miraglia.

Katie has been folkin and rockin as a solo artist and with her band The Sleepwells for the past 7 years. When not recording at her home SineStudios(www.sinestudios.com) or performing solo shows, Katie has spent her time in Philly developing music programs for after school and community mental health and addictions agencies with her Master's degree in clinical social work from Temple University. She also spent a summer teaching songwriting with Leonard "Hub" Hubbard of The Roots at Settlement Music School in Germantown, PA.

Katie has shared the stage with Matt Duke, Jackie Greene, Deb Talan and Steve Tannen, Citizen Cope with Meshell Ndegeocello, Sharon Little, and Melissa Ferrick. She has performed at notable venues and festivals such as Bethlehem Musikfest, TurksHead Music Festival, Block Island Music Festival, Club Passim, The House of Blues, Tin Angel, World Cafe Live, Pianos, The Bitter End, and The Rockwood Music Hall. Barbato was one of four winners of the “Revolution” contest held by The Philadelphia Songwriter's Project in 2011. She has done commercial work for Clear Channel, and has been featured on Radio 104.5 FM, WXPN 88.5FM, Boston's WERS and the NBC 10! Show.