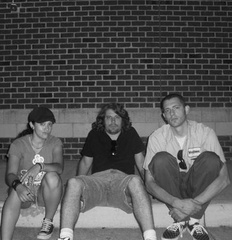 The Splints are a 3-piece Rock n' Roll band out of the Northern Virginia/Washington DC area with heavy punk rock roots and influences. We doubt they'll be mending any broken bones soon. More like shattering limbs left and right. Lynn Dials, front-man and guitar player, beats hard on a Squire Jagmaster, ripping out hooks reminiscent of Weezer with a soul-searching howl found in early Sub-Pop bands. DEZ, brace yourselves men. Not only does she play a mean bass guitar in a gritty rock band and wail a siren's song like a rock goddess should, she's an ex Marine. She's the kind of girl you wish you'd get your ass kicked by. Robert Cooper, mixing a perfect combination of restraint and reckless abandon, is a solid force behind the drum kit. Pounding out beats like a madman, he is without a doubt the engine that keeps the group moving. The Splints recorded their debut EP at Sun Studio in Memphis, TN. It's as if you can hear the ghost of Sam Phillips whispering sweet nothings in your ear as the band executes a 7 song sonic barrage, recorded live in only 6 hours. While in Memphis the trio also won Best Video at the Memphis Indie Film Fest for their music video for the song "Stillborn". Once at home in DC, they traveled to Electrical Audio studios in Chicago, IL and recorded their follow up disc "Love Letters and Broken Bones" with legendary recording engineer Steve Albini (Pixies,PJ Harvey,Nirvana,Stooges). Ripping through 5 tracks recorded and mixed in just a days time, the band created this sonic assault that should cause waves of lip-curling sneers and pregnant teenagers. Look for shows in the VA/DC/MD area. And go to www.thesplints.net to watch for tour dates to see when The Splints will be hitting your town.

Bone Saw by Bri Arnwine, Buzzbin magazine
Lynn Dials had a vision for rock music and it didn't just end in his mind. When he decided to pursue life as a rocker he formed his very own band, The Splints, and soon began working on writing...
Rockazine Interview by Sondra Faye, Rockazine
Sondra Faye: What's it like recording inside the legendary Sun Studios in Memphis, Tennessee? Do you think Jason Hawes and Grant Wilson from TAPS (The Atlantic Paranormal Society - GHOST HUNTERS...
The Splints EP Review by J. Sohn, Banned Promotions
The Splints area straight-up, solid rock n' roll band. Sure, they are a punk band, but these "punks" have built a strong and sturdy foundation on rock. Lynn Dials and Nikki Cave both have voices...
Punk Globe Magazine interview by Kim Friederich, Punk Globe
Check out this highly addicting group. Coming to you out of Washington, DC The more you listen to their music, the more you want. Don't say I didn't warn you......
"Love Letters And Broken Bones" EP Review by Sharla Cartner, Punk Globe Mag
The Splints are a grunge punk rock trio from Washington DC. "Love Letters and Broken Bones" (EP) is their second release. The infamous Steve Albini (Nirvana, The Stooges, The Pixies and many...