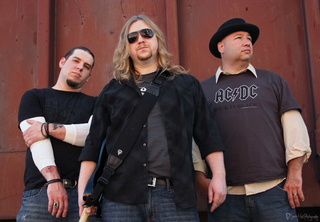 In an entertainment world that is constantly recycling images and trends, it's nice to take a step back and smell the home cooking that is rock and roll, no matter where the gig is. From dive bars to dance floors, one thing is for certain, with the Terry Quiett Band you can always be promised an original, blues-soaked, groove-inducing, soul-filled sound that isn't basted in the clichés of modern rock.

In short, Terry Quiett Band has bled the simple sounds from the viscera of alternative rock and given it a stout injection of blues with a whiskey backbone. This band was made to make you cry, laugh, dance, scream, jump, juke, jive, hustle, bustle, and fall in love, all on the same evening...the kind of experience you can only gain through a touring, live band.

The fact that they travel from city to city, town to town, to play for even the most meager crowd rekindles my faith in musical performers that still play because they actually want to... because they love to...because they need to. It's hard to find bands like that anymore and the Terry Quiett Band wears that badge proudly.
This Band has been very diverse in sharing the stage with some great acts in the classic rock, blues and country industry.
The Doobie Brothers,Edgar Winter,Albert Cummings,Eric sardinas,Eric Tessmer Band,Oreo Blue and many others...

Unkown Rock Blues Band by By: Adam Reichenberger
Take the steely blues guitar sound from Stevie Ray Vaughn, match it with the rhythmic bass and drumming of Golden Earring and you get the Terry Quiett Band and one heck of a show. The crowd at...
CUT THE ROPE. CD review by Cap'n Barney
Gawdamighty this CD is hot. If heaven is a blues-rock bar (and I'm hoping it is ... ), then TQB will be the house band. TQB evokes some of the classic rock and blues greats - Clapton, Walter Trout,...
Long Saturday Night review by
I'm loving the intro guitar tone. Very very nice. Vocals sound great, nice mix, well produced. Lead guitar is fantastic - tone, tone, tone! Sound is tight. This is a great song. - Thaniel from Oak...