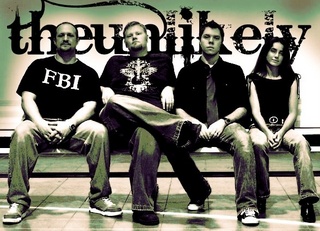 Combining the sounds of blues, rock, pop, and modern worship, The Unlikely is a musical force to be reckoned with. Bringing to the stage more than a nice guitar riff or punding tom fill, The Unlikely (For The Unusual/TUFTU) births new life into the realm of sound and music with lyrics that penetrate deep into the soul offering a new meaning and idea of what it means to be human, walking the tightrope of life. With their 2008 debut, The Unlikely may be a new band, but new to the world of music, they are not. With seasoned musicians and a lyrical mastermind at the helm, the turns will keep coming, and the music is sure to intrigue.

We can come in two flavors: Full Set and Acoustic. For a full set, we will requre a sound system and a sound tech/engineer to run sound. If we are playing an acoustic set, we have a 300 watt small system that can accomitdate a croud of 100-200 people.

Our Only other requirement is a hungry croud who is ready for great music!

The Unlikely, August 2009 by 95one.com
I like the band name. "Unlikely" is the way God seems to like it. The Bible is full of "Unlikely" stories. Remember the story where God pared down Gideon's army to only 300 men and did the...
Written In Red by MySpace
Written in Red makes my heart bow down every time I hear it. My eyes are opened by the lyrics, The chords reverberate in my ears, and my soul is at peace with the reminder that Jesus signed my...