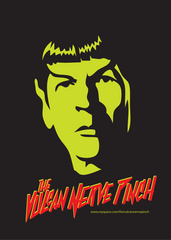 “Musically,” says TVNP front man Jake Kritzinger, “we took a classic early 90s alternative rock approach. A genre of music that is remarkably popular amongst misfits and idealists. The songs on this album are more melodic than post-hardcore rock yet voluminous, more disruptive and less formulaic than big-budget productions such as Prime Circle. There are many grunge elements lurking around on this record, influenced by character observations and social politics. It’s a record infused with a combination of solid beats, chiming riffs and buzzing distortion topped with a regular-guy voice.”

“The lyrics,” Jake reveals, “proclaim satirical humour, perplexity, hostility and self-mockery along with subtle traces of well-guarded authenticity. Consequently, the writing on this record cannot be absorbed at face value as many hidden meanings are rooted within the songs.”

Conceptually, frequently used shortcuts in judging others takes its inspiration from the issue of person perception. Individuals frequently use a number of psychological shortcuts in judging others due to the burden of perception and interpretation. These techniques often make the task more manageable as they supply valid data in making predictions about others. These assumptions, however, are not always foolproof. The album art underpins this concept by illustrating a surrealistic journey through the Karoo, reinforced by an antique encyclopaedia-type layout. Various pre- and post-apartheid themes also emerge, which contribute toward the idea of people perception, without steering the album into a political light. Ideally, this creative cocoon exemplifies a search for true identity and self-worth.

Frequently used shortcuts in judging others was engineered, mixed and produced by John Paul De Stefani at B# Studios in Johannesburg, South Africa during early 2007. “What instantly drew me to B# is the high production quality J.P. supplied for fokofpolisiekar and Fuzigish on their past albums. Not to mention the infamous Just Jinjer. The man is an audio-wizard and has also worked with numerous other bands outside the rock scene which gives him depth and variety.” The album was mastered by Rogan Kelsey at Lapdust Audio Masting, also situated in Johannesburg.

The opening track, and the album’s first single, Epoch, encapsulates the irony of politics and warfare: “Bite the hand that feeds/crippled reasoning deeds/We’re all slaves of what society’s suppose to be/Exposed at the drop of a hat/Trigger-patriotic attacks/Done waiting on redemption to harmonise us a leap year…/Never mind the terror, your guns and ammo will make it better.”

By means of personalised song content, TVNP seeks to create awareness regarding societal issues affecting the youth in South Africa. The band also aims to unite like minded people to resolve these issues. In addition, they are fixated on relating to their listeners, which in return offers them a sense of identity and a sense of belonging. Through the band’s superlative level of artistic self-expression, fans tend to grow emotionally by shifting/rethinking common ideologies as expressed in Alphabetical Listings: “Never claim to be someone else/Never live your life in doubt/Never question agendas, rather point the finger and…/Shout.”

“Being able to connect with our listeners,” Jake confirms, “is a crucial part of the band’s existence. We are undeniably involved with our fans by supplying them with regular updates and feedback via our affiliated websites and online social groups.”

“The idea of creating fictional characters for each composition is an element of songwriting which really excites me.” Jake confirms his statement by extending both identification and empathy to the The Invitation by Oria Mountain Dreamer during Madeira Cove, tracing a melancholy relationship between two people who are forced to part ways due to unforeseen circumstances. As the song peaks, the emotional burden weakens both parties which results in an unfortunate consequence.

THE VULCAN NERVE PINCH is an independent three-piece alternative rock unit, reaped into existence from the post-apartheid bowels of Bloemfontein, South Africa. The band has been together since early 2005, and currently consists of founder Jake Kritzinger (Lead Vocals/Guitar), Gert Kriel (Bass/Vocals) and Jaco de Wet (Drums). Towards the end of 2006, the band moved north and is now established in Johannesburg. They have been gigging around Gauteng throughout 2007.

According to the hit sci-fi television series Star Trek, the Vulcans were the alien species to make first contact with the humans in 1957. The Vulcan nerve pinch is a martial arts technique developed by the Vulcans. Likely related to neuropressure, it involves applying pressure near the base of the neck and nearly instantly renders the target unconscious. The technique does not appear to cause permanent injury and seems to be effective on most humanoid species. The Vulcan nerve pinch was invented for the episode The Enemy Within by Leonard Nimoy – who felt that the famous Vulcan character, Spock, was too dignified to use more traditional and violent techniques in harming the opposition.

The boys adhere to a unique set of ethical values that are engraved into their souls, and which echoes through their artistic expression and love for music. As loyal South Africans they realise the importance in placing all racial and cultural issues aside in an attempt to unite the youth and future leaders of our country. And what better way to accomplish that objective than through the expression and dynamics of music? In conclusion they primarily seek a desperate and drastic change in the underground music scene, which they are determined in bleeding their name onto.

“After finally releasing our album, we are very excited to be getting back into a more permanent gigging pattern,” said TVNP’s Jake Kritzinger. Following the release of frequently used shortcuts in judging others, the band intends on performing at venues nationwide throughout 2008.

Thanks for your time.