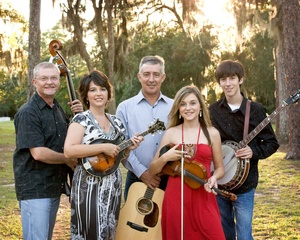 Robert Wilson is a simple man. He believes in God and church, his family and bluegrass music...in that order. These simple values have created a bluegrass band performing at a level that excites audiences and draws people to them through their warmth, their musicality and their freshness. The Wilson Family Band includes father Robert on guitar and vocals, his wife Melissa on mandolin, eighteen year old son Clint on banjo and vocals and twelve year old daughter Katie on fiddle and vocals. This band's obvious enthusiasm for their singing and playing as well as the bond they establish with festival audiences is infectious and inspiring. Robert learned to play the guitar and sing with his family in church. He cannot remember a time when music wasn't a part of his life. Robert was a founding member of River Grass Review in the 80s and toured up and down the east coast from New York to Florida. He has found his greatest satisfaction now, singing and performing with his family. Melissa grew up in Jacksonville, FL playing music with her grandfather and cousin. She played in a local band in her teens and then she met Robert. After filling in for River Grass Review's current mandolin player, she became the full time member for about three years. She left the band to raise their new family. Clint is eighteen and a freshman in college. He seems quiet and reserved until he strikes his Huber banjo. That's when his personality shows up. Clint is the 2006 Florida State Sr. Division Banjo Champion, a title he won after playing the banjo for slightly over a year. Not only is he an accomplished banjo player, but he also plays guitar, bass and some mandolin. He is becoming a very good songwriter as well, having written several of the songs the family performs. When not pickin', he enjoys recording and playing golf. Katie is twelve years old and in the seventh grade and has been playing the fiddle since June 2006. She has stage presence way beyond her years. She sings with sure strength and tune. Katie is becoming a songwriter with help from her 'hero' Becky Buller. She also enjoys riding her bike and talking on the telephone. The newest addition to the band is Blake Gowen on the bass. Blake is fourteen and is from Woodbine, GA. Blake is turning heads in the bluegrass scene with his unbelievable talent and effortless sense of groove. He is the son of Robert's sister Elizabeth, making the band a complete family unit. The Wilson Family Band plays festivals, churches and private events. "Music is a part of our life. We go to church, school, work and play music. We try to teach God first, family second and bluegrass comes next." These clearly stated values show themselves in every interaction with the family. ~Ted Lehmann

"...puts on an extraordinary show..." by Charles Cornett - FOTB
The Wilson Family Band puts on an extraordinary show that brings something that I think has been missing these days. Family. It's clear that everyone has an integral contribution to this show, from...
"...As much at home on stage as off..." by Dale Kennedy - Riverbend BG
When The Wilson Family Band performs, what you’ll see is exactly the same as if you heard them playing in their living room. As much at home on stage as off, they combine their music and humor with...
"...will capture and impress all ages..." by Don Miller - Just Right Prod.
The Wilson Family Band will capture and impress all ages. As a radio personality and Bluegrass promoter, I have to say some time you receive material that’s not presentable. Not with the Wilson’s,...
"...Thanks so much for the beautiful music!" by Becky Buller
Robert and Melissa, you have done well. Two beautiful, talented children to your credit who enjoy playing music with you. How did you do it? Can I get parenting tips from you? The fun you all are...
p
A
n
E
F
Song Title by Artist Name