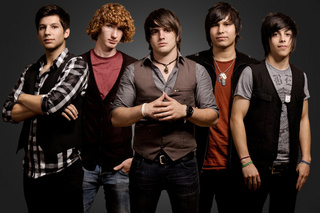 Catchy Melodies, Musicality that packs a punch, and lyrics that scream of bad tales only just begin to describe this five piece band from Edinburg, Texas known as This City Alive. This City Alive was formed in February 2010 and recorded their debut album “Things We Have and Haven’t Said”. With songs like "runaway model" and "party queen" that depict bitter sweet romances that everyone goes through it is to no suprise why This City Alive's fanbase continues to grow rapidly. With the release of their album, touring, and currently writing a new album This City Alive has been hard at work and aim to keep their fans entertained with new music. This City Alive is definitely on the right track to being successful musicians and for being such a brand new band they have definitely made a huge buzz and this is only the beginning for them.

HOTTEST ROCKERS 2010: Jerrod Prater by
Killing time in a smoky room, Jerrod Prater sparks up another cigarette and takes a long, slow drag through the filter. Though he’s just old enough to be legally lighting up, he somehow seems...
p
A
n
E
F
Song Title by Artist Name