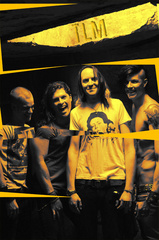 ‘Burn the world’, ‘Set the world on fire’, however you read into it, TORCH LE MONDE translates to brilliance. Reputation alone secured and sold out headline gigs interstate and generated an insatiable demand from newly recruited fans for the band’s charisma and indescribable energy. 2009 also demanded they head to the United States to show off their skills. A 23 date tour across the East and West Coast proved to be a success achieving a fanatical and refreshingly diverse following. What sets this band apart from others in their field is that they are gifted songwriters, unbelievable players and consistent in the studio and onstage. They are also young, incredibly driven, and have a cohesive band image.