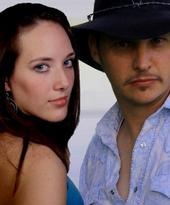 Born in Daytona Beach, Florida. Steven started playing sax at the age of 10. He started playing guitar and writing songs at 18 and moved to Nashville when he was 23, where he sat in on recording sessions with Richie McDonald from Lonestar. Steven studied and was coached by Donna Anderson, country music legend John Anderson’s sister in the art and craft of song writing. He recorded and produced his first original country CD in 2001 which features Bruce Watkins from Alan Jackson. In 2002 Steven sang the National Anthem at The Daytona International Speedway. 2003 Steven went back to the studio to produce and record three more original songs. December 24, 2007 Steven performed at Alltel Stadium. In 2008 Steven returned to the studio in St. Augustine and wrote, recorded and produced his second full CD. Early 2009 Janell Marsh auditioned as backup singer for the Steven Craig Band. After hearing their vocals together, September 2009 Steven and Janell were excited to start a new project in the studio. October 2009, they became Town and Country. Currently they are preparing to release their first cd as a duet.

Bring our own equipment

06/20/2002 - Writer Tuned to Tomoka Park - By Dina by Daytona Beach News Journal
Ormond Beach - At 10,000 acres, the marshes and hammocks of the Tomoka Basin Geo Park surround the mouth of the Tomoka River and include sugar milly runis, early settlements and 300 species of...
12/01/2005 - Local artist donates latest proceeds by Clay Today
Orange Park - One local resident recently returned from a journey to Nashville, and came home bearing CDs for his fans to enjoy. The whole CD is a collection of songs that came out of a 10 year...
07/2002 - Songwriter Steven Craig's CD to benefit by City of Ormond Beach
Aspiring Nashville recording artist Steven Craig returned home to Ormond Beach recently to help raise awareness and funds for the Tomoka State Park with a new CD single, "Tomoka River Cries." The...
p
A
n
E
F
Song Title by Artist Name