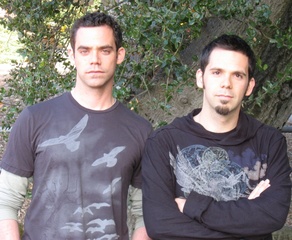 Trifonic is brothers Brian and Laurence Trifon, a San Francisco based electronic act that seamlessly fuses experimental production wizardry with beautiful melodies and traditional song structures to craft music that is simultaneously unexpected and accessible. On their 2008 debut album Emergence, Trifonic combines elements of downtempo electronica, IDM, post-rock and classical music to create a deep, lush musical experience distinctly their own. Since releasing Emergence in February 2008, Trifonic has quickly made a name for themselves, earning praise and respect from bloggers, DJs and listeners around the world. Most notably, after hearing the track "Parks On Fire" from a friend, renowned electronic act Hybrid said they "fell in love with it straight away" and decided to feature the song on their new mix album Soundsystem 01 (2008, Nettwerk/Hope Recordings), along with tracks by Massive Attack, Trentemoller, Sasha, and Hybrid. Despite growing up under the same roof in Berkeley, California, Brian and Laurence launched their musical careers from opposite ends of the spectrum. Brian took up guitar at the age of 10 with only one intention: Shredding. “I had big dreams for becoming the next Steve Vai guitar hero,” he recalls. Meanwhile, his older brother was living and breathing hip-hop. “I wrote my first rap song when I was in 5th grade,” Laurence remembers. “It was about me not wanting to go to school on a Monday morning.” Although Brian’s heavy-metal dreams did not pan out, he did master the guitar sufficiently to enroll in USC’s prestigious Studio Guitar program. It was during this time that he began to explore electronic music and production. Upon graduating in 2004, Brian went to work as a guitarist and programmer for famed electronica artist BT. Laurence, meanwhile, continued to write and perform as an emcee in several hip-hop groups throughout his school years. As a student at Stanford University, he also began to gravitate towards electronic music. By the time they had both graduated from college, the Trifon brothers’ music tastes had converged. “We realized that for the first time in our lives, we were on the same page creatively,” Laurence says. “So we decided to work together.” Trifonic’s first track, a breaks mash-up called Bored on Your Backside, was the top vote getter in WIRED Magazine’s 2005 Freestyle remix contest. Over the next year – while Brian was in Los Angeles and touring nationally with BT, and Laurence was in San Francisco working as a business consultant – Trifonic entered and won two more remix contests hosted by ccMixter. That’s when Hollywood started calling. After licensing music to the hit TV show CSI in 2006, Brian and Laurence decided it was time to commit fully to Trifonic. They began working on their debut album, Emergence, in 2007. On Emergence, Trifonic masterfully blends manipulated ambient sounds and synths with live guitars, strings and other instruments to create a rich, layered mixture of organic and hi-tech elements. “I love combining familiar instruments with chopped-up percussion and time-stretched sounds,” says Brian, the programming mastermind behind each track. “I’m very interested in bringing humanistic and mechanical components together.” In addition to cinematic instrumentals like the epic “Parks On Fire” and the ethereal wall-of-sound “Transgenic,” Emergence also features seductive vocal collaborations with Amelia June (”Broken,” “Lies”), David Forest (“Good Enough”) and Nonesuch Records’ Christina Courtin (”Sooner Or Later”). “This was my first attempt at writing rock/pop songs,” says Laurence, who wrote the lyrics for most of the vocal tracks. “Each one is ostensibly about loneliness, loss and sadness. But there’s an underlying sense of hope and optimism as well.” From start to finish, Emergence is as uplifting and intense as it is melancholy and subdued. It is an inviting, warm and intricate record that offers new discoveries with each repeated listen. With a solid recording under their belts and a growing fan base, Trifonic looks to perform live throughout the United States in the second half of 2008 and 2009. Unlike many electronic artists, Brian and Laurence are not content to simply stand behind a laptop, press play and call that a "show." Throughout Trifonic's passionate live set, you will find Brian playing guitar and bass while Laurence plays keyboards... and even singing on occasion.

To be provided by venue/purchaser:

PA System suitable to the venue that provides clear, full range reproduction to all audience areas.

A sound technician familiar with the operation and cabling of the entire system, available from load in until the end of the show.

Concert Review: Trifonic, Mr. Projectile... by StrangerDance.com
...When it was time for Trifonic to take the stage the crowd was ready, displaying their support on black t-shirts. The brothers were the first act of the night to actually address the crowd, and...
Download: Trifonic by RCRD LBL
A couple years back we discovered a great site called ccMixter, a legal remix-sharing community where great artists a la the Beastie Boys, Christopher Willits, DJ Vadim, etc. serve up stems of...
Hybrid Interview by ilikemusic.co.uk
[Mike Truman of Hybrid discussing their "Soundsystem 01" mix album]... On the first CD there is Parks On Fire by Trifonic which is just sublime. I think it’s like the third track in. We based the...