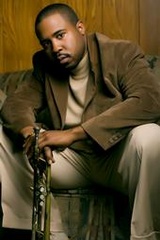 ASCAP and American Idol Underground contest/chart topper musician, producer, founder and President of Phat Barz Records (A subsidiary of Tamar Entertainment Inc.) started playing music at the age of 10. His first instrument was the trumpet. Through high school he expanded his talent and skill to the entire brass family of instruments while gaining gigging experience with the Young Professional Musicians of Houston. At the age of sixteen he organized his own five member jazz band; they began performing in jazz clubs throughout the city of Houston, TX. Summer months were spent participating and studying in the Summer Jazz Workshop conducted annually by Professors Conrad Johnson, Bubba Thomas, Kyle Turner, Joe Sample, Barry Hall (Director-Duke Ellington Orchestra) and others on the campus of Texas Southern University. He later taught himself to play the organ and the piano before attending Texas Southern and Sam Houston State Universities. He is a member of the American Society of Composers, Authors, and Publishers (ASCAP), the Writers Guild of America, and a Master Mason. He has played for many regional and national recording artists such as Kim Burrell-Young, Mark Gordon and Eternal Life Ministries, Charles Tyrone, Darius Brooks (Musical Director of the late Rev. Milton Brunsons Thompson Community Singers), Adrian Medearis and GODS Anointed People (GAP), Shawn McClemore, and has even shared the stage with Wynton Marsalis and Dr. Shirley Caesar. Troy presses to encourage young people of all ages, musicians AND non-musicians, that success is not in notoriety, but believing in and unleashing ones own abilities. He has provided musical accompaniment for the Missy Chu Childrens Book entitled, What Color Is Monday?, and the theme song for the Historically Black College Queens Workshop' entitled, All Hail The Queen. He currently mentors and tutors young musicians in the urban areas of Houston, TX. He is currently involved in the production of a Latin/Pop/R&B project with the immensely talented youth based super-group Caliente of the Diaz Music Institute. His newest project is the original music soundtrack for the theatrical stage production of Mary Terry Wiley's New Soul Opera, "For Your Souls Sake".For Your Soul's Sake A Soul Opera. Check him out at www.myspace.com/troybarnettmusic

Acoustic Piano (Grand Preferred, If not available, upright will suffice)

Andrew Revels of PRTV by internet Tv
PRTV Episode 1, Part 2 from Andrew Revels of Wisconsin (writer). Andrew Revels Quote: "I hope everybody enjoyed the first episode of PRTV. I have high hopes for the show and in the coming months I...
Troy on cover of Jam source by magazine
Troy was on the March 2009 issue of Jam Source Magazine interviewed by owner Carolyn Baker
KCOH 1430 am by radio dj
After Troy sang live on the radio Stevie T said," Can I get a Amen?You coming back right?" Troy went back for his second interviewDJ Stevie T
Lonal X. Robinson of Houston Sun Newspaper by Newspaper
CD Review of Troy Barnett: A little bit of R&B Soul & a lot of real & good music Troy Barnett a melody of what music used to be and should be now
KTSU college radio by radio dj
Donna Franklin said," Very incredible young man" "You have some knowledge my friend, at such a young age" "You can't put him in a box, in any category...he does everything!After listening to jazz...
Smash the Mic Booking Agency by internet booking agency
Great Music! I see you started playing at the age of 10 and you currently mentor and teach youth in the Houston area. You are to be commended for your music and community outreach efforts! Keep It...
Charles G Danna of United Internet Resouces/URLABE by Major Record Label Executive
H town artist Troy Barnett has put together a cool and catchy rap song. The lyrics are a clever and humorous take on gold digging women. Since Troy plays trumpet, the horns are his arrangement and...