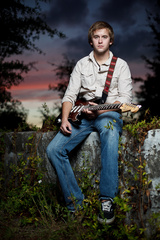 Tyler Boone is a singer/songwriter from Charleston, SC and has been writing and playing music for over three years now. Just releasing his first two albums "Connections" and "Stuck Between" in the summer of 2010, he is starting to make a name for himself in the music scene. Having his music played on WXRY and WARQ in Columbia, SC and also The Bridge 105.5 in Charleston, SC, Tyler is staying busy. Tyler is working on another record with producer MJ Fick and is aiming to release his next E.P by February of 2011. Also just releasing his new single, "Austin" for free download on his website, Tyler is building up steam for his next E.P. Be on the lookout for his new release in early 2011. Tyler also plans on making once more another E.P in the summer of 2011 as well.

Interview in The Blue Lotus Review by
Click Link for Interivew
Sounds of What Might Have Been by Feb 26th - The White Mule with I-Nine
You can get the listings anywhere, but you’ll get the story here.I Nine is back together — for one show at least.On Saturday, the band that formed in Columbia before inking a deal with legendary...
Boone Lights up Career by Sydney Patterson
The members of the band formerly known as Red House, who now go by the name of front man Tyler Boone, met in high school, playing music for their jazz band. Those roots, combined with musical...
Interview in "VENTS" magazine by
What's the meaning behind the band's name?We just call the band now, "Tyler Boone" but we used to call ourselves "Red House" which we got from of course, the Jimi Hendrix song.How the band...
Random Interview "Absolute Punk" by
1. How did you get your band name?We used to call ourselves Red House from the Jimi Hendix tune, but after a year under that name, we just changed it to Tyler Boone.2. How did this band get...
Swoon over the Boone by
Spring semester is finally here, and if you’re like me, you want to get a kick-start on your New Year’s resolution. This year, I’ve decided that I needed to listen to more local music, so what...
Boone Strengthens Skill with Local Show by
Last Friday, South Carolina’s indigenous talent Tyler Boone entertained audiences at Columbia’s The White Mule. Boone performed with Yo Soybean and The Private Life of David Reed as part a...
Noelle and Anne Blog Interview! by
Click Link for interview
Interview in Low Country Blues Blog by
..Tyler Boone and his group has been at Mantis Records making thier first, "full band" record. Some of these songs he’s been sitting on for about 2 years now. They recently picked up a new drummer...
Interview - www.scenesc.com by David Stringer
1) Describe your music for those who aren’t familiar.My music is really a marriage of both pop music and blues. My music has a lot of emphasis on the guitar and being a blues guitar player, it’s a...
p
A
n
E
F
Song Title by Artist Name