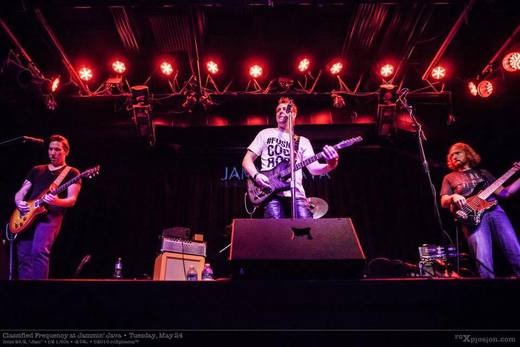 "The best parts of pop/rock from every decade but still new and unique" is a quote from a fan that seems to describe Classified Frequency perfectly.  They are an exciting Power Pop (or as they like to say, Fusion Cock Rock) quartet from Maryland who have simply blown the doors off of the DC and Baltimore music scenes with their non stop, energetic shows and their super hooky, arena rock anthems.

They've toured up and down the east coast, played countless festivals and showcases including Hard Rock Cafe Pink Jams where they were picked as one of the "Top 5 Bands To See" (Stephanie Williams; DC Music Download), Noise In The Basement which got them featured on 98 Rock with Matt Davis, Yelp NOVA where they played in front of 800 people and got them featured on Channel 8 News in Rosslyn, VA, and Celebrate Fairfax, one of the biggest festivals in northern Virginia.

They were an "Honorable Mention" on The Deli DC blog for Best Upcoming Band and voted as "Band of the Month" on that same blog for January 2015.  In 2016 they beat out over 65 bands to win the Jammin Java Battle of the Bands in Vienna, VA and in May, they will play a benefit concert for The Joe Strummer Foundation at the Black Cat in DC.

They've released two EP's with a third on the way.  Most recently, the "Reach Out" EP started the band's relationship with Producer, Jim Ebert (Marvelous 3, Butch Walker, Meredith Brooks, All Time Low) and extended their relationship with Mixing Engineer, Jamie Woolford (The Stereo, Let Go, Tickertape Parade, The Gin Blossoms, The Story Changes) who mixed their debut EP, "Heart Attack."

Classified Frequency will undoubtedly be one of the most talked about bands in 2017 and beyond so don't miss them when they come to your town and remember to proudly where your #FusionCockRock t-shirts.