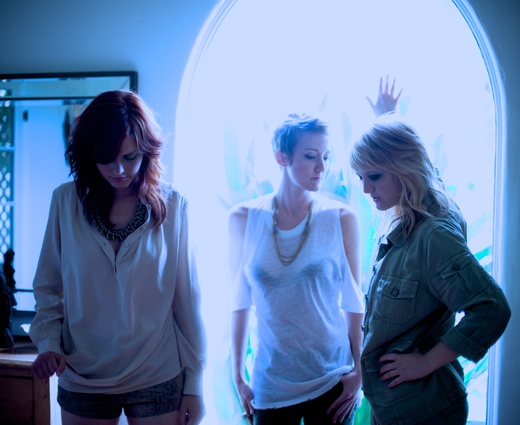 Vanity Theft is an all girl indie/alternative rock group from Springboro, Ohio whose music has a demand for attention that is hard to ignore. Forming in 2005, the band consists of Alicia Grodecki on keys/effects (harmonica, bells, tambourine, you name it) and vocals, Brittany Hill on guitar and vocals and Elyse Driskill on drums. Vanity Theft first made a name for themselves in 2006 with the release of their EP “Symptoms” which was described as: “a five-song EP that is artistic, engaging and captures a wisdom that reaches beyond a typical debut. It is professional and smart, with concrete, fully developed lyrics.” – Citybeat (C.A. MacConnell) Now they’re taking the Midwest by storm with the release of their first full-length album “PostScript: Pace Yourself,” named the number 1 debut local album of 2008 by Dayton Daily News. This 10 song release is full of catchy, upbeat tunes that will keep you tapping your feet and rocking out all the way through. This breath of fresh air will only grow as Vanity Theft continues to tour, playing with and for anyone who wants to have fun and hear something new.

Meet the Band: Vanity Theft by Metromix Cincinnati
If there is one thing that Cincinnati’s local music scene sometimes lacks, it’s female-fronted bands. Even more so lacking is what Vanity Theft offers – an all-female alt-rock band. Formed in 2005,...
Dayton's Damsels: by Examiner
Coming from Dayton, Ohio, a city that most people wouldn't recognize on a map unless they were familiar southwestern Ohio; many either forget or don't know that this city does have quite an...
Thursday Pick: Vanity Theft by Citybeat
In its bio, this Dayton-area foursome says the members are “just trying to break the stereotypes of lame girl bands and play something that doesn’t sound like everything else out there.” Mission...
Stealing the Show: Vanity Theft at Warped Tour by Examiner
The Van's Warped Tour has always been a grab bag for anyone who goes. Normally, you have two or three bands you want to see and the rest you're able to tolerate ... but ultimately could care less...
Vanity Theft Q&A: by ActiveDayton
Vanity Theft Style of music: Indie rock Location: Springboro, Ohio Members and instruments played: Alicia Grodecki (vocals, keys, guitar, effects), Brittany Hill (vocals, guitar), Lindsey Keene...
Eye of the Tigress by OurStage
Vanity Theft is part of a pedigreed lineage of female rock bands. The Runaways, The Go-Gos, Sleater-Kinney—you know the sort. Girls who elbow their way through the male-driven rock paradigm and...
Music Video: Vanity Theft by Nylon
Vanity Theft may be all-female, but this foursome definitely isn’t your average girl group.With catchy guitar riffs, an in-your-face sound, and lyrics that are, ahem, straight to the point, this...
Some Sound Advice for 2011 by New York Post
VANITY THEFT: Following in the not-so-dainty footsteps of riot grrrls Sleater-Kinney and rock goddess Joan Jett, Vanity Theft is an all-girl rock quartet that plays harder than most of the boys....
Vanity Theft: Reinventing Girl-Rock by Static Multimedia
Edgy, dark, powerful, sensual: these are four excellent descriptors of the girl-rock band, Vanity Theft. In October, Vanity Theft released their Anatomy EP and immediately caught the attention of...
Download of the Week by Roxy Blog
Available 2/9-2/16: Vanity Theft “Anatomy (Houses Haunted Tapes Remix)”The women of Dayton, Ohio’s Vanity Theft make awesome songs, somewhere between the fist-pumping chick power of Sleater-Kinney...
p
A
n
E
F
Song Title by Artist Name