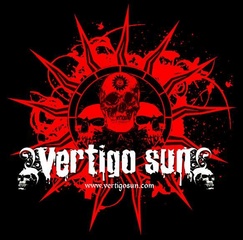 Although (Lafayette) based Metal band Vertigo Sun has been around since '96, Guitarist Dustin Boatman’s creative vision didn't start to take shape until recruiting vocalist Kyle Roberts in September of '99. After a few lineup changes in the up-coming year, the band finally settled on a permanent drummer with Jason Cavallaro. Jason, at the time a section leader of UL-Lafayette drum line and who had recently toured nationally with The Blue Knights drum and bugle corps, walked into the rehearsal space and played just a few minutes of a song and the band knew he was the guy. In 2002, VS went into the studio to record their self titled EP, with Rick Lagneaux of (Totally Swamped Records). Although the band was still very young in their songwriting, the self-titled album sold well locally and produced fan favorites such as, “Self-Inflicted”, “Not like You” &“What’s the Odds?”(..which was ranked number 4 out of 12,000 other metal songs on garageband.com in July of 2002). In 2003, Vertigo Sun headed to Los Angeles, California to record “The Cutting Purpose”. Roy Mayorga (formerly of Soulfly) mixed the record with the help of Blake Plonsky (ex-Amen, New Dead Radio) engineering and producing it at Under City Studios (North Hollywood) owned by Baron Bodnar (MEDIASKARE). Although it wasn’t officially released, it showed a much more mature, heavier sound and produced blistering songs such as “Blood water”, “Town Hero” & “Inside (cliché)”. With the songs getting heavier and more layered, the band decided to take on a second guitarist and Eric Dooley was added in 2004. Meanwhile, the song “Inside” caught the attention of Danny Broussard (Set X Records) and was featured on a few compilation cd's distributed in South East Texas, which landed the band an indie record deal with Set X Records. In 2005, Vertigo Sun went into the Control Room (Nederland Texas) to record the 7 song e.p. “A Dirge for the Weak”; released to rave reviews. The album showcased the band's songwriting ability, Kyle Robert's from the heart vocal approach, and the unrelenting groove that has made VS stand out in a scene of cookie cutter bands. After extensive touring in the South, the band returned to the studio in 2007 to record four new songs. After hearing the quality of the unfinished product, Danny Broussard decided the band was ready to have a full length album. The label added the strongest songs from "Dirge" to this new session and “The Recoil of Control” was born. This twelve track full length album included solid songs from the "Dirge" e.p. such as: “LiveStrong”, “War I Am”, and “Place Called Hell”, as well as brand new tracks like: “Aces & Eights”, “Towards the end”, “Chicago Typewriter”, & “Plan B”. VS also teamed up with Director David “Stitchez” Anthony of Ocular Intrusions Film and photography (Solution no.13 productions) to make a video for the song “Plan B”. With limited label support and promotion the band still managed to sell well into the thousands of "The Recoil of Control", and the bands online fan base grew bigger by the day. During this period, the band played hundreds of shows a year with almost no outside support or financing, all the while every member working day jobs. The band has shared the stage with national bands such as: All Shall Perish, In This Moment, Car Bomb, Too Pure To Die, Cephalic Carnage, Goat Whore, Soilent Green, Winter Solstice, Black Light Burns, Five Finger Death Punch, The Dog and Pony show, Suicide Silence, Rumplestiltskin Grinder, Deadboy & the Elephant Men, New Dead Radio, & Exhumed as well as headlining hundreds of shows in front of packed houses. But after years and years of roughing it in the underground metal scene and the physical abuse from an intense live show, the band went on hiatus for most of 2008

Vertigo Sun!!! by DDDD
The Recoil Of ControlVertigo Sun have a lot of endorsements and awhole heap of followers and its not really hard to see why when I have the bone crunching "The Recoil Of Control" blasting out of my...
Recoil of Control by E-Metal Review
VERTIGO SUN - "The recoil of controlIf Hatebreed and Machine Head's tour buses got into a head-on collision, the resulting metal on metal symphony would resemble Vertigo Sun's new album, "The...
A dirge for the Weak by Ginnie Moon
Vertigo Sun remind me of the early days of Biohazard; a sound I've always adored. What's amazing about Vertigo Sun though is they take that cocky streetfist attitude and add a big fat wall of...