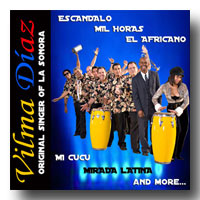 VILMA DIAZ "CUMBIA DIVA" Formerly original lead singer of the popular tropical band "LA SONORA DINAMITA". Vilma Diaz, a brilliant Colombian singer, recognized internationally for her mastery of the "Cumbia" rhythm. Born in Medellin, Colombia, a city that prepared her to be one of the main vocalists of "La Sonora Dinamita". At the age of 20, record label: Discos Fuentes discovered her talent and she was offered a recording contract. The quality and power of her voice permitted her to become the lead voice of "La Sonora Dinamita" which is a favorite cumbia band around the world. In 1989 and already being part of "La Sonora Dinamita" had numerous hits such as "Ya Para Que","EL Desamor". In 1993 she recored ESCANDALO and as a result of the success of the this hit Vilma became recognized as "CUMBIA DIVA". In 1995, "No Te Vayas Nunca", "La Virgen De La Macarena" and "La Malagueña"became major hits in Mexico within Tropical music. In 1999 released CD "Siempre Adelante", in 2001 released CD "Pasion de Cumbias", in 2004 released CD "Protagonistas de la Cumbia" and in 2008 Vilma Diaz released the single "Mirada Latina" with is now played in most popular latin radiostations. Vilma has appeared on numerous television spanish and english shows such as "Sabado Gigante", "Jerry Lewis Show", "Cotorreando", "La Movida", "Siempre En Domingo", "El Show de Johnny Canales". "Adelante Hispanos", "El Show de Cristina" as well as live performances in "Fiesta Broadway", "Festival De La Calle 8", "Latin Pride", plaza"(Monterrey-Mexico), "Los Angeles Sport Arena". "Madison Square Garden" , "Hollywood Park Casino" and several places in Mexico, Europ, Canada and the wide world. Her life and hit songs have been covered in all top publications, TV an radio stations. Vilma continues singing with her implacable voice and her own band and she maintains some of the original Colombian musicians that also played and recorded with "La Sonora Dinamita" since 1989 and she continues working very hard on new and fresh projects to satisfy those who are and will always be her admirers, which ones for her are fountains of inspiration.

SOUND MINIMUM REQUIREMENTS
Purchaser shall supply Artist with a professional Sound system (JBL, Meyer, or equivalent) with an active crossover system with three (3) or more crossover points. Provide a full frequency response of no less than 40Hz to 15,000 Hz± distributed evenly over the entire sound spectrum and delivered evenly to the entire audience.
Sound system must have adequate power to deliver 120 db spl of continuous sound with an absolute minimum of total harmonic distortion.
Sound system must be able to maintain sound pressure levels of 90 db at the rear of the performance area.

The following front of house sound console and outboard equipment are essential:

The following monitor console and outboard equipment are essential:

All equipment can be replaced by other with similar quality. It is very important to have direct communication between Sound Company and Vilma’s Show. If Purchaser can not provide some of these minimum requirements, shall contact our office to deal the issue.

*Small venues could be subject to some changes on this rider.