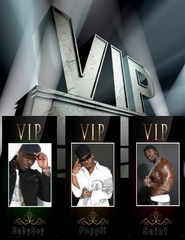 VIP (THA BADBOYZ OF R&B) BABYBOY - POPPII - SAINT VIP is an R&B trio out of Minneapolis, MN and Miami, Florida. VIP is definitely a triple threat and a force to be recond with. Being artist, songwriters, choreographers and businessmen,they also a keen sense of image and style. This group has an endless list of fans (Domestic and International) and a reputation that definitely proceeds them. With a cultivating sounds from the past, present and future. These versatile BadBoyz have been known to make any song or track their own. VIP is what the music industry is missing. VIP has an incredible marketable image and a high level of entertainment.