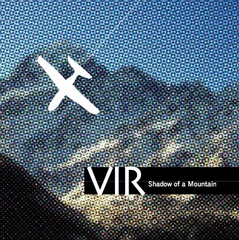 SF Post-Punk / Shoegaze trio by way of NZ. debut album "Shadow of a Mountain" is out now and available on

Vir’s Shadow of a Mountain blends elements of post-punk and shoegaze to create a glacial, dark and elegant record. Sam Sloane’s mercurial and echo-laden guitar drifts through the record while Natasha Arens and Jeff Paul’s rhythm section build and swell around the escalating tension in Sloane’s vocals.

With the band now based in the SF bay area but with roots in Christchurch, New Zealand, the album contends with a longing for home and a sense of loss despite the idealistic urge for challenge and experience abroad. Drawn to the contradictions and contrasts in the U.S the album contends with a futile attempt and defiant struggle to challenge an insurmountable mountain, as a result, Vir produce an album evocative of the American landscape.

Vir’s music is unashamedly melodic, honest and affecting. The songs are built on an engaging dynamic of fragility, melancholy, ambiance and intensity. Live, the band is uninhibited in communicating songs of love and loss and the fervor with which they play elevates the music to evocative peaks.

Sf Chronicle by SF Chronicle
SF ChronicleSF Chronicle Article on VIR...No one quite knows for sure what the letters VIR stand for in the name of this San Francisco shoegaze band. Well, maybe the band members do, but they're...
RadioIndy by RadioIndy
Shadow of a Mountain" by VIR is a dreamy and melodic shoegaze-style alternative rock album that features good songwriting and an innovative, experimental sound. The influence of early new wave punk...
East Bay Express by East Bay Express
EAST BAY EXPRESSYour Daily Lick: VIRShadow of a Mountain (self-released)Finally, someone makes this shoegaze revival thing work. Oakland's VIR, formerly called Montana, lays U2-size vocals,...
Beautiful Noise Broascast by Beautiful Noise Broadcast
My personal reflections on the album is far more than post punk and shoegazer. This album hits almost every aspect of Shoegazer with its ethereal sensibility, hammering harshness, and blurry...