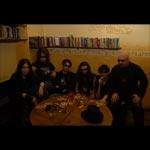 Viridian are a Polish rock group, combining the sounds of Seventies and Eighties rock, with metal, gothic and progressive elements.

Viridian formed in 2002 and has since undergone several line-up changes. This has not stopped the band from being continually active in the Polish underground scene: from club gigs, through festivals, to charity concerts and large outdoor events.

So far the band has financed two recording sessions: in October 2004 - resulting in a four-song EP "Through The Looking Glass" and in May 2005 for the "Peter Pan/World In Your Hands" single. Songs from these sessions have recieved airplay in Poland and the US and are being used to promote the band on the Internet.

May 2008 Rock sponsored by First Act