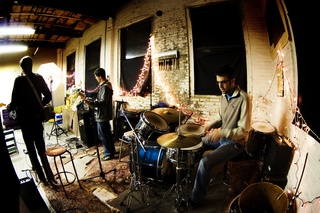 Vivian Darkbloom is perhaps the best-kept secret in the Boston music scene. Their songs and stage performances speak for themselves, but they also have some must-see secret weapons. Rob Morris's Wii Guitar is always a crowd pleaser, and has been showcased to Yamaha, Nintendo, and, most recently, to members of Aerosmith. A video of the invention recently went viral, receiving over 40,000 plays in a few hours, and appearing in dozens of tech blogs - such as wired.com, engadget.com, and gizmodo.com. Vivian Darkbloom's first, independent release - "Let's Become Machines" (2007) - was enthusiastically received by journalists, bloggers, and peer-review sites. Songs from the debut release garnered five top-ten chartings on ourstage.com, and "Jamie" was selected as "track of the day" on Garageband.com. The band has also been a featured artist on CMJ.com, ourstage.com, sonicbids.com, garageband.com, and indiestop10.com. They have shared the stage with national indie and major label acts, and they routinely play weekend shows at prestigious New England venues (including T.T. The Bear's in Cambridge). Recently, they were selected to perform at the 2008 CMJ music marathon in New York. Since July, 2008, Vivian Darkbloom have been recording with Producer Scott Riebling (Fall Out Boy, The Academy Is, Metro Station). The new music was released online in October.

Boston's One to Watch - 2008 by Ryan's Smashing Life
Vivian Darkbloom is Boston's Hot New Band. They're young, creative and really good. After just a year of playing together as a band; Rob Morris (vocals and guitar), Brian Skerrat (bass and vocals)...
CMJ/Sonicbids Spotlight by CMJ
Alt-rock triple threat, Vivian Darkbloom, won the CMJ Sonicbids spotlight award for the week of April 7, 2008. Formed in Cambridge, Massachusetts in 2006, the group has already toured throughout...
Live Review by SecretlyIronic.com
The highlight, though, was the middle of the three performers, Vivian Darkbloom. Their track “Cold War,” if there were any justice in the music biz, would be on heavy rotation. Lines like “I loved...
p
A
n
E
F
Song Title by Artist Name