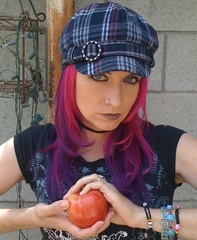 This lady has a voice that MUST be heard! I could see myself driving a couple of hours away to hear her in concert because it would be worth it." ~Darren Fox, Cutting Edge Voices ‘Making that voice heard’ was all she ever wanted to do. Singer/songwriter VK Lynne hails from Pennsylvania Dutch country, where she learned enough about the blues to sing them before she even owned a guitar. “Folks think that if you’re from that part of the country, you’re Amish”, she explains. “I tell them, ‘the Amish are there, but the white trash folks who live around them in trailers and such? Those are my people.’” She packed up and moved to LA, and once she found her footing, she began focusing on her solo material, and began her second full-length CD, Black Halo. Black Halo took off in the indie music cyber-world, and VK spent the early 2000’s hitting the Hollywood club circuit with her backing band, making notable appearances at such places as The Key Club, Genghis Cohen and The House of Blues on the Sunset Strip (opening for Cross Canadian Ragweed). “[VK] is not only gorgeous, with an amazing international marketing appeal, but her music is bloody fantastic. VK Lynne is a name to travel and be famous..." ~Eat This Music Thanks to her enormous MySpace and internet radio presence, she began to garner pockets of fans virtually everywhere. One of those places was Scandinavia. In 2008, she was contacted by Danish producer James Thomas (Cher/Beth Hart). VK was just preparing to go into the studio for the third time, with a collection of new material she was inordinately excited about, when the opportunity to work with him presented itself. She and Thomas discussed the project, the fresh direction she wanted to take, the fact that she had a growing fan base in Scandinavia, and decided that it was time for her to take a new approach in a new place with a new face. VK gathered up her songs and headed to Denmark, where she and Thomas created the tracks that would become Whiskey or Water. “James listened to my lyrics and listened to my voice, and created a sound based on them- (rather than the narrow, sometimes obvious instrumentation ideas I lobbed at him)- a sound that I hadn't heard before. The sound of VK Lynne.” Heavily blues-based, but grounded in rock, Whiskey or Water chronicles the last 3 years of VK’s life and her spiritual journey throughout that period- Her struggles with anorexia, Hollywood, religious hypocrisy and love. There is tragedy here, yet hope. “What I am trying to say with my songs can be summed up in one scripture”. She smiles, “In this world you will have trouble. But take heart- I have overcome the world.”

PA and a place to stand!