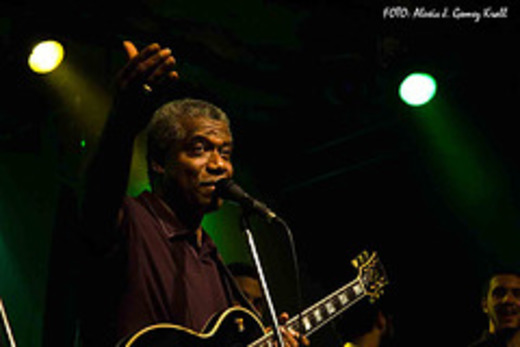 According to Rootz Reggae & Kulcha magazine, “Eugene Grey is yet another of the many genius guitarists of world class status that Jamaica has produced” playing professionally from the age of 14. Eugene has toured worldwide as lead guitarist with such artists as Grammy Award winners Burning Spear and Toots and the Maytals, as well as Culture, Fab 5, and the internationally acclaimed Kid Creole and the Coconuts. More recently Eugene completed his own tour in Argentina in 2008. During all of 2009 Eugene toured worldwide with Sly and Robbie as the lead guitarist.  In December of 2010 Mr. Grey released his latest solo double album CD called Diversity and was inducted into the Bob Marley School of Music Walk of Fame. 2011 saw Eugene perform as guest artist on the Reggae Jazz Fusion at the Broward Center for the Performing Arts featuring the legendary Jamaican jazz pianist Monty Alexander.

His official debut release Timeless (Greyphone) in 2002 was nominated for a 2003 Reggaesoca Music Award.  In June 2004 Eugene released Shades of Grey (Greyphone) which was also nominated for a Reggaesoca Music Award in 2005. Beat Magazine (2004) states “Eugene Grey soars on Shades of Grey (Greyphone); the roots reggae version of a smooth-jazz album that showcases his stylized virtuoso electric guitar with soft backing vocals, chunky tracks bedded by real bass, drum and subdued keyboards.”

All of Eugene’s releases were recorded at his own studio, Tropic Isle Recording Studio, Inc. in Fort Lauderdale where he is the engineer. The studio has evolved over the last 21 years and is currently equipped with the latest software to handle live and MIDI recordings. Tropic Isle not only records Eugene’s projects but also the projects of other artists.  Two songs on Ernie Ranglin’s latest release Surfin’ (Telarc), “Dance All” and “Yu Si Mi” were recorded at the studio as well as Eugene playing guitar.

Other artists Eugene has performed with include Max Romeo whom he toured with for the first time in Europe, Horace Andy, Big Youth, The Harlem Renaissance Orchestra, America’s Singing Poet Steve DePass, West Africa’s Abdou M’Boup and Vieux Diop, Tony Cafresi and His Latin Orchestra, The Wailers, and The Skatalites. While with The Skatalites Mr. Grey performed with Charlie Palmieri and Arthur Blythe at New York’s club ‘Village Gate’. In 1992 Eugene performed with his group, POWER REGGAE as the opening act and backing band for Jamaica’s Gregory Issacs in Switzerland.

He has recorded on all of the albums by Kid Creole and the Coconuts including arranging the song “Haiti” on their 1994 project. Eugene’s contribution to other recordings include the album “Voice of the Rastaman” by Shanachie artist Ras Tesfa and on the 1995 album “Via Jo” by Triloka artist Vieux Diop from Senegal, West Africa. As mentioned before, he recently played on two songs of Ernest Ranglin’s 2005 release Surfin’ (Telarc).

Another aspect of Eugene’s career included performing as musician in theatre musicals. He was a member of the orchestra in the Off-Broadway play “In A Pigs Valise” in 1989; “Pecong” in 1991 at Newark Symphony Hall and the Off Broadway Classical musical “Sally and Tom” at Castillo Theatre in 1995/96.  He was Musical Director for the Off-Broadway musical “Rasta” in 1995 as well as in 2004 for Irving Burgie’s musical review “Day-O” at the Stratford East in London. Eugene had years earlier arranged 42 of the original songs of his longtime employer, Irving Burgie for this Broadway Musical review.  These songs were made famous by Harry Belafonte 50 years ago.  His arrangements garnered extensive praise from Mr. Burgie’s label Cherry Lane Records.

Eugene released in 2007 another project called “Authentic”.  This album comprises all original material with the exception of an arrangement of Bob Marley’s song Jammin’ giving rise to the name authentic. It was during this year that he traveled to Argentina on request to perform.  Eugene’s show was such a success that he was invited back in 2008 to perform as well as having a compilation CD called “Our Song” released in Argentina.

Jamaican Guitar Legend Eugene Grey Talks about His by
Guitarist and composer Eugene Grey, in addition to a long-thriving solo career, has played with some of the most famous bands in Jamaican history – from Toots and the Maytals to Burning Spear....
p
A
n
E
F
Song Title by Artist Name