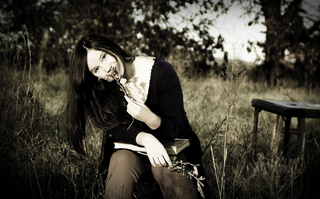 Wild-Wood formed in the summer of 2005, the
daydream realized of singer-songwriter Tony
Lechner. The Northampton, MA band owes its
sultry sound to Lechner’s talented songwriting
and the belief of its members in the pure and
simple beauty of the human voice accompanied
by acoustic wooden instruments.

With foundations in folk, bluegrass, and
old-fashioned rock and roll, the group melds
sweet vocal harmonies with the sounds of fiddle,
upright bass, mandolin, drums, guitar, and
piano to create a sound that appeals to people of
all ages and musical tastes.

Wild-Wood has performed in intimate venues all
over New England. Expect to see them soon at a
coffee shop near you.

PA System with at least three microphones for vocals.
DI for Acoustic Guitar.
Mic for fiddle.

Album Review by Valley Advocate
Valley band Wild-Wood offers a quietly insistent acoustic brew. On much of Wildflower Lullaby, shuffling drums drive the tunes, and mandolin punctuates smooth soundscapes of violin, upright bass...
Worthy of airtime by Mocha Maya's Cafe
It's a funny thing about Wild-Wood...they are easily one of the most talented bands to ever play Mocha Maya's, or Shelburne Falls for that matter...tight rich harmonies, skilled, professional,...