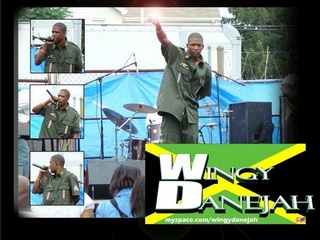 Biography:
Born in the beautiful city of Kingston, Jamaica on June 2, 1977, Wingy weighed 4.2 pounds (hence his stage name, Wingy). During his formative years he attended the Alpha Boys School and St. Joseph College in Kingston, where his liking for music began. The late Bob Marley was an inspiration to Wingy.

His musical career was launched in 1994 as an entertainer performing alongside the likes of Beenie Man, Spragga Benz, Lady Saw, Red Rat, Tonto Metro & Silver Cat, Little Kirk, Tok, Sis Nancy, Briggadeer Jerry, Papa San, Stitchie, Claudell Clark and Jr. Tucker. Wingy has since given his life to Christ. In November, 2003 Wingy made the front page of the local newspaper for being the highlight of a show with his energetic and huge new gospel style. Wingy is frequently compared with dancehall artists Red Rat, Zebra and Baby Wayne, while spitting fire for Christ.

"Depend On God" contains sounds of Hip Hop, Dancehall, Jazz and Roots Regge, with Guest Appearances by Monty G, Dwain Walters, Dane-jah-rus and Joy. This versatility is shown in songs like "World Gone Mad" and "Unity." This is an evangelistic album geared toward reaching teenagers for Christ. "Depend On God" is an 18 track album addressing the world and its false gods. It also includes songs of encouragement and gives many reasons why we need Jesus Christ in our lives.