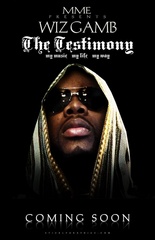 A native of North Philadelphia, Dwayne Murchison, learned the value of music at a young age. Growing up in a tight knit family surrounded by six brothers and three sisters, Dwayne, also known as Wiz Gamb, became deeply rooted in church hymns and singing sessions. Crediting his parents, Wiz says, Music has always played apart in his life. His father plays the saxophone, piano and drums and his mother has the most serenading voice that anyone could ever ask for. This laid the foundation for the aspiring writer/ producer/ artist. Graduating from Gratz High School, Dwayne left a great impression that would soon affect all. His flawless flow of moves and captivating voice soon mesmerized not only friends, but soon stretched to the masses and various cities. Starting in his hometown of brotherly love, Philadelphia has molded this undoubtedly talented producer. Wiz Gamb heightened rap to a new level. Real life experiences transpired into vivid descriptions which composed lyrics that artists could connect with. Wiz Gamb’s musical dexterity has exposed him to genres of Gospel, Hip-hop and Rap. His production talents have blessed him to work with artists such as Lil Kim, Fabolous, Jaguar Wright, Eve, Bahamadiah, west coast legend Richie Rich, Chris and Neaf, Mike Knox, Big Dune, Major Figgas, Ram Squad, Oschino, Sparks, Jaime Knight, Aisha Patterson, Mamoona and a host of others. He has performed with artist through out the USA and abroad with some of hip hops finest including Jay Z, Ludacris, Ja Rule, Camron, Wutang, Youngbloodz and, B2K. Wiz Gamb released is first solo project independently in 2003 called Unorthodox. He took the project on the road with little promotion and booked tour dates himself, where he sold cd’s along the way. The self promoted Cd has sold 10,500 copies to date. His current projects include movie scoring and producing the soundtrack for the up and coming movie SOULFUL. Wiz Gamb is looking forward to continuing his burgeoning career and solidifying his status as one of the top writers and producers in the music industry. Look out for the mix tape BACKINMYBAG HIP HOP 101.