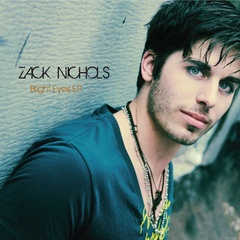 Singer/songwriter Zack Nichols tells stories with emotive honesty, but coupled with the slick production of John McVey of Coupe Studios in Boulder, Colorado, Nichols’ debut Bright Eyes EP (releasing to retail and digital February 24, 2009) is more than typical singer/songwriter fare. Nominated for Denver's Best Singer/Songwriter by Westword 2006 & 2007 and armed with a powerful, soulful voice that falls somewhere between Gavin DeGraw or Ray LaMontagne, this collection of tracks is radio-ready infectious pop that simply can’t miss in raising eyebrows. Bright Eyes EP combines Nichols’ influences of folk, pop, rock, blues, jazz and soul, as he continues to hone his own craft as a songwriter and a performer. Originally from Denver, Nichols grew up in a musically talented home and learned both piano and guitar at a young age. He subsequently found his passion, learning the art of blues through Stevie Ray Vaughan and John Lee Hooker, and rock from the likes of AC/DC and the Beatles. Once he began writing and performing his own music, Nichols quickly rose to prominence in his new hometown of Denver, sharing the stage with the likes of Josh Kelley, Better Than Ezra, Ari Hest, Will Hoge and more. He’s also toured nationwide and even in the UK over the last couple of years. In addition to being armed with a solid debut effort, Nichols is hoping to tap into the lucrative world of film and TV, his music being tailor made for such placements. Meanwhile, he’s out to show the world what he’s about, and the Bright Eyes EP is something he can be proud of.

Performing Songwriter Magazine by Performing Songwriter Magazine
Nichols may be a newcomer, but his six-song debut is expressive and impressive. His aching originals convey a lofty sort of yearning, while his sole cover, a take on Martin Sexton's "Can't Stop...
Westword by Westword
In his info sheet for the 2007 Westword Music Showcase, Zack Nichols described his music as "vulnerable," "soulful" and "optimistically heartbroken" — and these terms can also be applied to his...
Caught In The Carousel by Caught In The Carousel
Bright Eyes, a six-song EP from Houston native Zach Nichols, is a tasty confection of southern-blues rock. It has stylish melodies, catchy hooks, and solid lyrics bound to melt a few hearts, soothe...
Hard Rock Haven by Hard Rock Haven
Comments: If Zach Nichols' Bright Eyes E/P is any indication of what the full length album will be like, Zach's headed for a bright future. A Denver native, Zach is a songwriter's musician. His...
p
A
n
E
F
Song Title by Artist Name