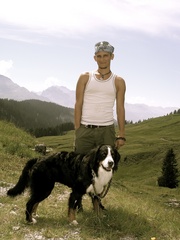 zenmetalshirt is experimental electronica, industrial, breakcore, metal,ambient. zenmetalshirt is a one man - music - project formed in 1997. it has grown out of roy’s need to develop his musical world beyond trend-measurements. his ambition is to produce emotional, powerful, straightforward music. there is no preproduced stuff in his music. he collaborates with musicians from the USA, Switzerland and Germany. styles include classical, indie rock, elektro punk, metal and hardcore. his latest project "Hartmannswillerkopf" features violins of the song "fly away" by Jennifer Thomas (9th in instrumentals july 2008 on ourstage.com).