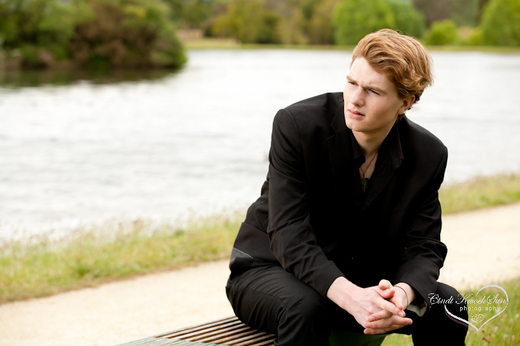 For years, Gareth Barker flew under the radar. Born in Cardiff, Wales, Gareth filled his days with school, sports, and hanging out with his mates. His life was unassuming—happily average.

He was confident enough to win a rock climbing competition and a triathlon, but when it came to music, he was intensely private. About singing, “I was very shy,” Gareth remembers. Yet when a family move to New Zealand uprooted him late in his teen years, he was forced to redefine himself at a new school, in a new country. There, Gareth found his voice.

On a whim, he recorded himself singing and dropped off the tape with the school’s music teacher, Mr. Andrew Stopps. He included a note: “Please listen.”

Mr. Stopps, did listen, and flippantly wondered why this “person I’d never heard of” had downloaded a few songs and given them to him. What he heard was a smooth jazz-pop infusion, vocals so mature that he never suspected the artist might be a student. Catching up with him the next day, Mr. Stopps asked where he’d gotten the songs, and when Gareth answered, “It’s me,” the music teacher assumed the whole thing was a practical joke. Surely, talent like that couldn’t be hidden in plain sight.

Yet when Mr. Stopps asked him to sing, Gareth complied. “I was blown away by his voice,” the teacher remembers. “His voice was as good live as it was on the recording.”

Having been discovered in a high school hallway, Gareth was immediately asked to perform in front of the entire student body. As he took the stage in a humble school gymnasium, his new schoolmates were at first skeptical. Most people didn’t even recognize, Gareth, the new kid at school. Mr. Stopps remembers, “when we first started playing, there was a little bit of snickering—who was this guy?”

“I was extremely apprehensive,” Gareth says, but “as soon as the music started, my nerves disappeared.” When he opened his mouth, the teacher reports, jaws dropped.

Jaws keep dropping. Gareth’s outsized voice is more heavily influenced by old-school crooners than mainstream pop. His musical education has included an emersion in artists like Ronan Keating and Gary Barlow, and he’s already snagged the attention of Hollywood, having performed in a private show for Peter Jackson, Ian McKellen, and the entire cast of The Hobbit. The singer has chosen to take a more concerted and artistic path, focusing on song quality and musicianship, purposefully eschewing the typical bubble-gum pop sounds that dominate today’s airwaves. But with a favorite motto coming from H. Jackson Brown—“Never let the odds keep you from doing what you know in your heart you were meant to do”—one can almost sense an excitement from Gareth, to take on any challenges or obstacles that may come his way.

While Gareth took his time embracing his love of music, he is now a dogged purist, who insists his live performances live up to his recorded albums. Just a few years ago, Gareth was too timid to sing in front of his family. Today, he has recorded and performed across three continents. His songs are filled with the width of life—dreams pursued, loves found and lost, a well-travelled teenager finding his way and maturing into a man. With an old soul’s voice and the youthful passion to pursue a crazy dream, Gareth’s lyrics “I want to face and wipe my fears,” proclaim to the world that he is an artist that has found his voice and knows just how to use it.

Behind-the-Scenes Video: My musical journey & the making of my new EP!