« See all of JP Textt's Songs 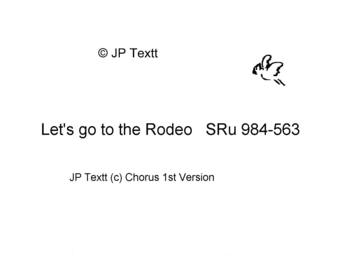 This is unusual that the JP Textt (C) chorus instead of verse starts first and name of the song...
Uploaded: February 18, 2012
Duration: 1m 45s

You're one of few or ONLY rising Country singing stars that have ALL original songs posted at ourstage.com AND have Holiday or Christmas songs.  If they don't give you a FAIR comment, they might be jealous and can't write even a simple song.  Your songs show you have originally written it other competition they might have been given a song, songs in general just don't happen to have everything right just seonds after it's written.  Willie and Dolly were said to be song writers first, and there may have been resistance at first to his nasal sound however became his voice. Yeah, there should be Rodeo songs to sing to the Rodeo and having it chorus first gives it something different or easier to remember.