« See all of JENDOR's Songs 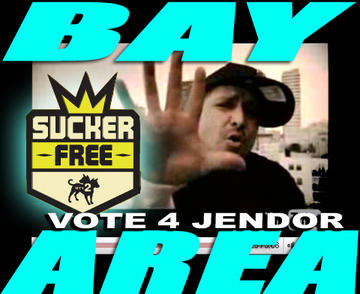 I wrote 'Pave The Way' as a tribute to some of the Pioneers of Hiphop who greatly Influenced myself and so many others in the hiphop culture.
And thier are many more Pioneers who helped pave the way.
Freshmen 5 Winner July 2008, MTVU Deanslist twice August 2008. MTV2 Sucker Free Independent Hiphop Week! Famecast.com Hiphop Fenom Winner April 2008. Notorious (Movie) Contest winner July 2009.

Please look for me online at

Comments for Pave The Way

nicee
But hey we're new to this site and we believe we have lyrical talent too. Check out our two songs and give your honest feedback. http://www.ourstage.com/epk/weirdcompliment. Also feel free to become our fan at http://www.facebook.com/pages/WEird-Compliment/120794077959445?ref=ts
by WEird Compliment on July 14, 2010 at 4:27 PM EDT

OFF TOP I APPRECIATE ALL MY BAY FOLKS UP IN THE SPOT
THEY ALL DESERVE THE RESPECT AND HONOR OF SHINING. THE BAY GOT SOM'N 2 SA
AND WE COMIN.

HOLD ME DOWN FAM