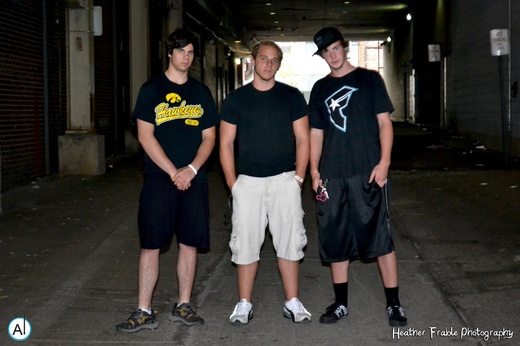 All In is an Alternative/Pop-Punk band from Stroudsburg, PA that was created purely by accident. The two original members, Chris Eckert, or “CJ”, and Zach Knudsen were playing guitar in a music room in their high school (trying to avoid class as usual) when they overheard each other. They were both frustrated with the people they had previously been working with and when they heard each other it seemed like a perfect fit. They were the same skill level, loved the same kind of music (Blink-182, AVA, Weezer etc.) and had been friends, but just never knew each other’s musical potential. Soon after they found each other they created “From The Depths Of My Heart,” which instantly became a hit amongst their peers. Through word of mouth, they started getting asked to play private shows and began to realize their potential.
Currently they have close to 100 songs that are ready to be recorded, that fans can hear at their live shows. Unfortunately due to lack of funds they have only been able to record 6 songs in a professional studio. Soon after college started for both of them Zach found a drummer at his school, Liberty University. At that time Chris was leaving Philadelphia University due to money issues. They started to play shows together and found that the three of them were a good fit. Chris then chose to attend the Conservatory of Recording Arts and Sciences in Tempe, Arizona and now has a degree as a professional Audio Engineer. Over this past summer, Zach and Chris felt the drummer lacked the same commitment and dedication to the band as they did and decided part ways with him. As a replacement, they found a local drummer, Matthew Pomichowski and are beginning their “new” musical journey with him.
Both Chris and Zach have such a passion for music, it is, and always will be their number one love. They are both perfectionists in everything they do and won’t stop until their music is exactly how they’ve envisioned it. One thing is certain: these young musicians are putting it “ALL IN”!