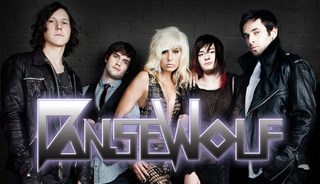 People have loved comparing the difference between LA and New York for decades. Their words spill out of their dullard mouths in bars, college parties, and uninspired lunches, always missing the point. Los Angeles isn't like New York even remotely. It isn't like any other city on Earth. Life in Los Angeles is like a waking dream. The most beautiful and idealistic people on Earth mix with the cruelest and most cynical monsters imaginable. Dreams are born and celebrated while others are trampled underfoot. Somewhere between beautiful fantasy and grim reality exists DanseWolf, a new electro-rock combo who summarize the sprawling fantasyland even as they redefine it. DanseWolf's Juls D summarized the City with, “There's a certain raw energy about LA... Nobody seems to work yet everyone's working their ass off. There's a hunger in this city and living here you feed off of it.”

DanseWolf's sound is seductive and sinister but poppy and sweet at the same time. Imagine yourself in the funeral scene of Guns N' Roses' music video for "November Rain" but instead of people looking depressed they're all partying and bopping around with cute girls in little black dresses. When asked to describe which groups helped shape the bands' sound the DanseWolf crew pointed out Blondie, the Strokes, and No Doubt. The influences are immediately evident in the feel-good rock n' roll that DansWolf spurt forth like blood from their freshly gashed arteries.

The band's debut six-song EP is guaranteed to blow heads and turn some slumber parties upside down. "I Think Maybe," opens up with jangling guitars and inviting words before unleashing a barrage of sound, a high-energy wall of noise and the only way to keep from tapping your feet to is by nailing your shoes to the floor. "In LA" is a powerful yet melancholic tune describing the dizzying highs and crushing lows of living in Lala Land (LA). "Like a Ghost" slams you with guitars and drums before giving way to a soft, sad Roy Orbison style piano riff and then describing a tragic romance with someone who doesn't care.

The story of how Juls D arrived at the band's nomenclature is the stuff of legend. She dreamt that she was wandering through the long gone Tower Records on Sunset Boulevard and examined a vinyl copy of Madonna's new record. The sleeve was shiny and black with the title of her new album emblazoned in neon green, “MADONNA/DANSEWOLF.” In true LA fashion DanseWolf has literally become their dream.