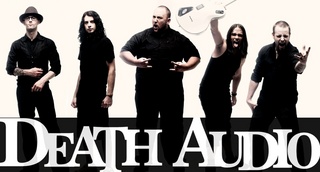 Death Audio has all the ingredients to complete the formula that will both enhance and highlight the Australian Metal Scene. With a struggle in public interest for the Australian local music scene, Death Audio has turned heads, broken new ground and proved a difference by forging something new that has gained them a solid fan base throughout the country. Publicized in April 2008, the band started off their career with the release of their first single “Murderous Times” and a national tour with the mighty Frankenbok. As a new band playing their first thirteen shows with one of Australia’s most well known metal bands gained Death Audio a solid reputation as one of the fastest growing metal bands in Australia.

Shortly after the first tour, Death Audio had created an impact with a massive online database and the hype of the local Melbourne fan base calling for more songs and shows. In late 2008 Death Audio released the song “Dust of your Memories” on their MySpace music page, within 24 hours they had reached 2000 plays on that individual track. This saw their online database growing to 500 more fans worldwide a week.

In 2009 Death Audio has created an international impact on the World Wide Web that is forever demanding the band for more music and publicity in general. Taking a break for a few months in 2009 has given Death Audio the time to reflect on new music and marketing strategies. In spring/summer of 2009 Death Audio will be releasing a new single that has been described as a song so different in the Australian Metal Scene it would break barriers and make an impact on the sound of Australian melodic metal. The release of “Place the Blame” in October 2009 with a brand new line up surely gave Death Audio an imprint on Australian Metal history.

DEATH AUDIO – Which is definitely not a reference to dying by falling speakers but having a love for music to Death. This sums up the band completely. Being such a diverse group of individuals, now consisting of Josh, Jayms, Will, Fabian and Karl. Death Audio’s sound has elements of sheer ball tearing aggression, clean melodic harmonies to good old soloing and can be likened to such bands as: Killswitch Engage, Soilwork , As I lay Dying and Mnemic. Recently winning the “best new band” at the Australian Metal Awards 2009, and shared the stage with Static X, Unearth, The Black Dahlia Murder, Hell Yeah, Soilwork and Soundwave 2010. Death Audio is preparing an album that will change the course of their lives.