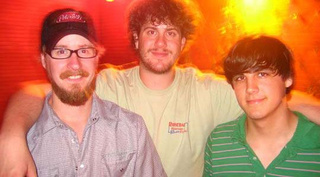 Disposable Faces is a Southern Hard Rock band from the center of the Mississippi Delta, a place where rock and blues originated, but has long been in the shadow of contemporary pop. The band has been hailed for its fresh originality and deep content.
The band started in early 2006 as a trio consisting of Will Griffith on guitar and vocals, Justin Huerta on drums, and Elliot Meador on guitar. Disposable Faces played over 150 shows all over Mississippi. Nick Sosebee was recruited to play bass on the band’s first album and has since become a permanent member. As a quartet the band has shared the stage with such acts as Blue Mother Tupelo, Blue Mountain, and Lucero.
Disposable Faces completed their debut album Realize I’m Alive in March of 2008, and has since began work on their follow up. The album was recorded at Tweed and Taproot Studios in Oxford, Mississippi. Brian Ware, formally of the Electric Mudd, signed on as the album’s producer. While Jeffrey Reed, who has worked with musicians like B.B. King, Agfhan Wigs, Kenny Brown, and the Kudzu Kings, engineered the album.
The band prides itself on their live performances and their ability to grab an audiences’ attention from song one. While Disposable Faces may often be referred to as a raunchy southern rock band, they have recently been flirting with a larger and sometimes darker sound while still maintaining the band’s signature appeal.