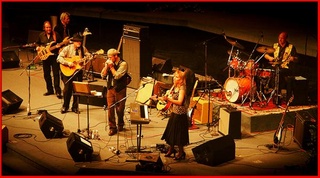 Firstborn was originally started by two best friends Joe Hawley and Lee Connors more than 20 years ago. The band is the quintessential example of rock n roll energy, concert style volume and great interaction with their audience.

A few years back the boys took a hiatus from live performance but re-emerged with a totally new and expanded band in 2004. The new band is not only known for high energy live rock n roll on stage, but also a larger than life sound.

FIRSTBORN LIVE!'s 2007 CD "Flesh n Bone" holds examples of the large number of original songs they have in their repetoire. This six piece band's natural bent will bring you back to the great music styles of the late 60's and 70's with layered instruments and vocals.