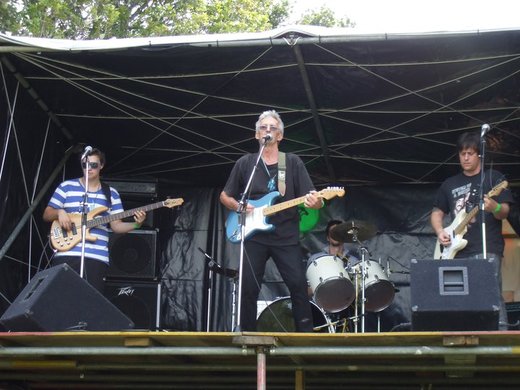 Well known in Wellington and throughout the NZ scene from 1967 -1980, Barry was the frontman in a number of popular dance bands,amongst the many some that caught attention were, "THYME BLUES BAND" This band set a then NZ non stop playing [live] record of 48 hours non stop in Cartertons Parkvale hall 1967 8pm fri- 8pm sun. The band went on to play in Australia in and around Sydney night clubs for twelve months, entertaining American troops on leave from combat duty in Vietnam, rock n roll heaven.

BARRY returned to NZ and formed. "NATURAL GAS" Pro band which performed in clubs [THE PLACE] LUCIFERS, home of the Wellington underground scene, pubs, festivals, concerts. The band recorded a single COME ON DOWN GIRL,which was banned by the NZBC for suggestive lyrics,[no not written by BARRY] it was an obscure cover produced none other than by PETER DAWKINS. The band won the wellington section of the battle of the bands, BARRY missed out in the Auckland finals to ROB GUEST, INBETWEENS, who went on to take the lead roll in PHANTOM OF THE OPERA, Australia.

Most of these artists and bands,played on a regular basis in Wellington. They all had one thing in common,they were all very, very, good. BARRY reckons the level that a lot of these guys were playing at then was huge, he can remember sitting in THE OROCLE WELLINGTON NIGHT CLUB, went on to be LUCIFERS he was seventeen or eighteen a three pce band JOYFUL CRY blew him away,HENDRIX TO THE MAX wicked players. Vocalists PHIL KEYS ,LA DE DAS, BRUCE SONTGEN, TOM THUMB, HIGHWAY, BRUCE was the man who most inspired BARRY,wicked vocalist huge projection, and range ,and after 40 yrs as of 6th june 2010 i've found him again.

BARRY, exited stage and went thoroughbred horse training,and farming for twenty odd years.During this time he relocated to the Wairarapa. One night late in late 1999 BARRY spotted an add for the Wairarapa music club, got hooked,started singing and taught himself rhythm guitar and. "THE HU HU BUGS" a collection of Wairarapa musicians who write and record original music. "THREE WAYS FROM SUNDAY"

Originals and covers band,BARRY founded "TIGHTLIPPED" which has had a number of line up changes,time moves on, and so do musicians, for one reason or another. BARRY can also play solo or as a duo in smaller venues where volume is an issue. The band plays full sets of original material which they are fast becoming known for by their growing band of supporters. BARRY SMITH, guitar vocals once quoted by Glyn Maclean Oikos music and husband manager of Yulia as having a balls to the wall [Jimmy Barnes] type voice and one of the strongest [projection] power voices he has recorded,BARRY indeed has a unique voice catch him live and you will see the passion he delivers on his tunes. ELZIKIEL CLARK lead guitar vocals , soon to complete degree in music. JAMIE POTTS drums percussion, on to it friend and drummer, currently qualified from music school with diploma JOHN MAYBE bass vocals.