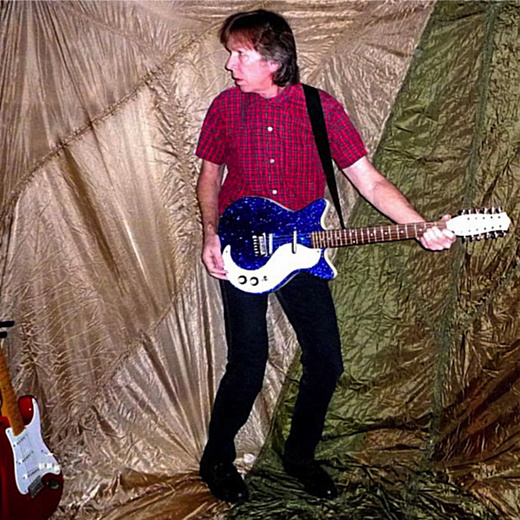 IN THE BEGINNING...
GARY RITCHIE, a lifelong CHICAGOAN (nw side) uh..er.. until recently (more on that later) thought he was going to be the next shortstop for the CHICAGO CUBS, until one night some kids on T.V. were singing YEAH! YEAH! YEAH! Then came The DAVE CLARK 5, The ANIMALS, KINKS, Gerry & the PACEMAKERS, HERMAN's HERMITS, and many more. He was in!
The next thing he knew was that his younger brother got a guitar, formed a band and was playing at the movie theater BETWEEN movies. People applauded and there were um...GIRLS acting friendly! He thought, in the words of JOHN LENNON, "THAT seems like a good job". The next thing he know's is that his brother is asking him to audition for his band THE PARAMODS. Well, he didn't even own a set of drums, but, he could try-out on the other drummers drums! The first thing they ask him to play is WIPEOUT! He couldn't play WIPEOUT. So needless to say, he failed the audition. But, that really got him interested in playing. So during the great SNOWSTORM of '67 his dad drove down to the southside of CHICAGO to get his first set of drums. Oh, by the way, Gary's brother Greg has still never said a word about the failed audition!
Gary went on to play in many bands, toured, recorded and just had a good 'ol time. And he has his younger brother to thank for getting him started. Oh, and of course those four MOPTOP guys too!! And oh yes, he still plays Shortstop in his dreams!
That leads us up to the NOW!
Drummer/vocalist Gary Ritchie, has recently moved to the Austin, Texas area (Wimberley). He came "kicking & screaming", but is now starting to get used to the idea.
Gary and former "Loose Lips" bandmate Jeff King have been writing and recording music for many years now. They seem to have that special musical bond rarely found these days. They first got together back in 1979 in a very popular Chicago band called "Loose Lips". They, along with Richie Mayer (guitar, vocals) and Danny Welch (bass, vocals, resident pretty boy) were among the top bands in Chicago. In 1980 they released what is now a classic Pop record. "Hung Up On Pop" received heavy air play for quite a while. The band went their separate ways in the mid-80's, but remained good friends. There were even talks of a reunion some years back. But, they came to their collective senses. Richie and Danny check in every once in a while just to make sure G & J are still breathing.
A few years ago, Gary was about to embark on a project saluting his musical hero's, The BEATLES. He was going to record one song from every Beatle album. Just about that time, Jeff King called to see what he was up to. Gary mentioned the "Beatle" project. Jeff wanted in. So, that's how they got back together. They went on to record 22 Beatle songs and called it "Beat The Meatles". It was so much FUN they decided to do it again, but this time doing ORIGINAL material. That is how "POP! RADIO" was born. It is a true and great collaboration. They are now working on TWO follow up albums. One for Jeff and one for Gary. We hope that you will enjoy "POP! RADIO" as much as we do. And by the way, if you ever see a copy of "BEAT THE MEATLES"...grab it! It's Goooood!!!