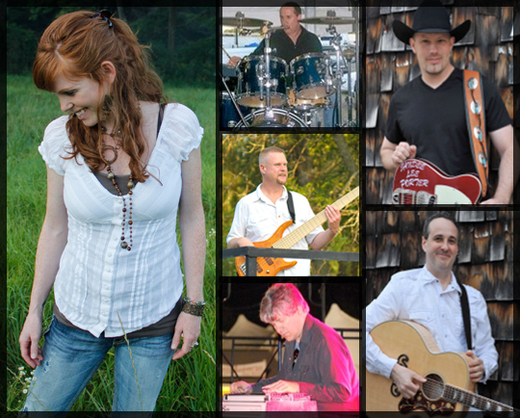 Jandee Lee Porter, a singer songwriter from the Connecticut River Valley in New Hampshire was performing local coffee houses and small venues by herself for most of her adult life. She spent most of 2009 supporting her solo release “Strangely Right” which featured a mix of folk, country and pop. Most of the music on this release featured a band of hired players who were not available to tour with Jandee. The fighter that she is, Jandee pressed on as a soloist and took gigs where ever she could get them.

In the summer of 2009, Mike Groove, guitarist and producer saw Jandee perform and was blown away. He reached out to her and offered up free studio time if she wanted to record more of her songs. Jandee agreed and later in the summer she put down a few scratch songs that would become the foundation for her next release. Mark Sciascia, country guitarist and Boston area native quickly joined the project and lent his talents as a co-producer and arranger. The 3 employed Boston area drummer and vocalist Michael Powers to start recording some of these new songs. In September of 2009, it was decided that a band would be formed and not only would these musicians record and release a CD, they would perform this new music live along with the songs off the first release “Strangely Right”.

By spring 2010, the band was complete with bassist Dave Mastroianni and pedal steel player Bill Holbrook. The band started rehearsing and gigging and released the CD “No Reason to Lie”. The website www.jandeeleeporter.com was also launched and things started happening immediately.

The future looks to be very exciting for the band as they are preparing to record their next disc.

The music of Jandee Lee Porter can be found on iTunes and other major music distribution sites.