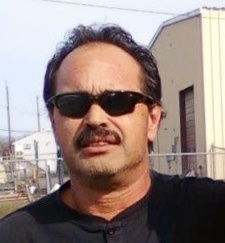 I was raised in Southern California primarily by my father. He could not afford to buy me a set of drums, so instead I learned to play the trumpet because that was the instrument that he owned at the time. When I was in my 20's I finally was able to purchase my first drum kit, with the wife's permission of course. I joined a group called Jara, we were a top 40's cover band. After about 5 years the family and I relocated to Oklahoma, so I had to leave the group. While in oklahoma I recieved my education in country music. The group that took me in were a bunch that claimed to had hung out and played around with The Bob Wells Buch back in the day. As a matter of fact our fiddle player claims to had been with Johnny Lee Before he finally made it big, and believed the the hit Cherokee Fiddle was written about him. About 20 years ago, life as I knew it changed when I received Jesus as my Saviour. Before graduating from Bible College in 1996, I had the opportunity to attend several music seminars throughout the Midwest sitting under some of the country's best Praise and Worship leaders. In 1992, I woke at 4:00 am and the words to Jesus I've fallen in love with you filled my head. I could not get them on paper fast enough. I believe God had a plan for this song and was using me to bring it to the world. The first recording was made in the Sanctuary after a Saturday night Praise and Worship rehearsal. All of the musicians from the team stayed and helped to put it all together. I asked my older brother Steve, who played guitar, to sing the lead. Steve past away last year so I am grateful to have his voice recorded on tape. Recently, after 17 years, I came across a box of tapes that had my originals, one of which was Jesus I've Fallen In Love With You. It has been on my heart all of these years to have this song produced and out to the masses, but for one reason or another the timing was not right. From out of nowhere, I was given an invitation to be a part of the Unified by Grace project, by Quickstar Productions. I believe the plan for this song is coming full circle, and I am blessed as it touches the hearts of others. I thank God for allowing me to be used in this capacity, my wife for standing along side during all these times. I want to thank my brother David, for coming along and getting on board to help me complete the project. God has blessed my family with the gift of music and David certainly shows up on the scene to lay those gifts down. Instruments played by David on this recording are the Electric Piano, strings, synths, bass guitar, rhythm guitar, lead guitar, and background vocals. To my sister Bobbie Jo, who for the last year has allowed me to turn her home into a recording studio. She is the producer of this project and without her finances, and going without this last year this might not have been possible.

One by one, Harpo De Roma carefully selected members for his rock-blues project from the local musicians playing at his weekly jam at the Trophy Club. "Harpo was organizing these jam sessions at the Trophy Club, and he would have the oppor-tunity to listen to a lot of different bands," says pianist Bill Eckart, one of the chosen. "It became clear there was different levels of musicianship, and Harpo was watching." Of the musicians, De Roma, a harp player, selected five for his newly resurrected band Rogue Rage, including drummer Sandy Ficca, guitarist Eric Heuschele, Eckart and bassist Rick Bolz. Drummer Jeff Schrick frequently fills in for Ficca, who is often on tour.

"We're all products of the '60s music scene predominantly," says Eckart. "We're baby boomers who grew up with rock 'n' roll." Heuschele will be moving to Albuquerque, N.M., but before he does, Rogue Rage will perform one last gig with the guitarist at 9 p.m. Saturday, Aug. 14, at The Brick in Central Point. Following the gig on Saturday, talented Ashland guitarist Joe Diehl will replace Heuschele in the band. Two years ago Rogue Rage featured a different lineup, but after the band broke up in November 2009, De Roma trademarked the band name and started looking for new players. "These musicians are something else," says De Roma. "The other guys were really good players, but it doesn't get better than Eric, Sandy, Rick and Bill. They are all top-notch professionals." Members of the new Rogue Rage boast an impressive resume. Heuschele has shared the stage with members of Lynyrd Skynyrd, The Allman Brothers Band, Firefall and Black Oak Arkansas. Bolz is recognized as being one of the original members of the 1960s psychedelic band Neighb'rhood Childr'n. Eckart has played with numerous artists, including Al Stewart, Larry Carlton, Joe Porcaro, Jimmie Haskell and Spike Jones Jr. He also worked as a session musician for famed producer David Rubinson, contributing tracks for The Chambers Brothers and Pointer Sisters, whom he introduced to Rubinson. De Roma recorded with Rolling Stones' keyboardist Chuck Leavell and Jimi Hendrix's drummer Buddy Miles in his album "Halfway to Cleveland." Diehl began playing professionally at age 17 with bands such as Tower of Power, Chicago and Average White Band. He now plays with blues artist Karen Lovely. In 1984, Ficca was offered the drum seat in the rock band Firefall, with whom he continues to play. De Roma recalls with amusement his first meeting with Ficca. He turned to him and said: "I toured with Buddy Miles; who the hell are you?" "He (Ficca) just smiled and told me who he was," says De Roma. "At the time, I didn't know his name or the name of Firefall or anything." Ficca recently founded Use Your Gift, an organization bent on offering individual mentorship to aspiring performing artists. For more information, see www.useyourgift.org. Rogue Rage plays a variety of Southern rock, originals and hits by Rolling Stones, Paul Butterfield, The Allman Brothers, Charlie Musselwhite, The J. Geils Band and Lynyrd Skynyrd. "This is the first band I've been with that the first time we played 'Free Bird' we nailed it," says De Roma.