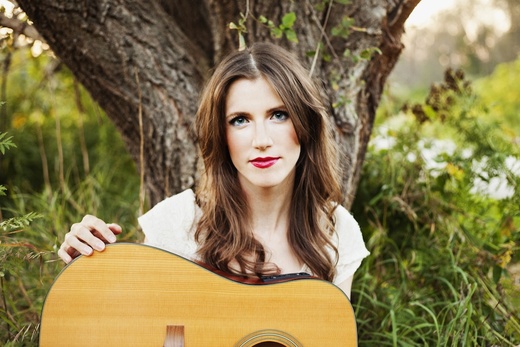 When Larra Skye began working on Explode, one of eleven songs on her latest CD, Wishing Tree, she sat alone with an acoustic guitar in what a line of lyric refers to as “a small apartment on the second floor” of a house in Toronto. When her producers, Karen Kosowski and Marc Rogers, heard it, they thought it sounded too melancholy, the mood not quite suiting the lyrics. And so, like many songs on the album, they began playing around with some ideas for it. “We’d get to work,” says Skye, “usually recording my parts first so we could then experiment with different sounds.”

A few days later, Skye showed up at the studio to discover Kosowski and Rogers had added piano and horns and simultaneously slowed the tempo yet somehow made the song sound bouncier, more in synch with the words. In the end, it became a kind of Beatle-ish number with a whimsical horn section toward the end.

“Karen, Marc and I had a creative collaboration that made everything come together better than I could have imagined,” says Skye. “This CD most closely captures what I’ve always wanted to do musically.”

It’s a direction toward which Skye has been slowly evolving. As a child, she would see her brother playing guitar in a band and listen to her older sister, Rosanne Baker Thornley’s, album, Courage, released by Sony Music in 1993. Skye began making up songs before she could play an instrument, writing lyrics in a spiral notebook. At 11, she found instruction books in her parent’s bookstore and taught herself classical guitar as well as how to read music. Like Joni Mitchell, she would make up chords that sounded interesting or different. At night, she would sit in the bookstore in darkness – she didn’t want to be disturbed by anyone thinking the store was still open – recording her songs onto the telephone’s answering machine.

Music had become her life and she was determined to pursue it in every way possible. She played slide trombone in the town’s marching band and joined a professional children’s choir that performed in England and Wales as well as around Canada. She sang in school plays and began performing in local coffee houses. With some classmates she formed a folk-rock band called Mars Violet that gave her experience as a bandleader as well as an outlet for her original songs in both English and French.

In 2004, Skye spent a year woodshedding her music in Hamilton, emerging back in Toronto in 2005 with her first solo album, The World Disappears. Featuring top players such as trumpeter Kevin Turcotte, saxophonist Bob Brough, bassist Jim Vivian and drummer Kevin Brow, The World Disappears became the number one bestselling independent jazz album of the year for HMV Canada and received airplay on the CBC as well as jazz and campus radio stations across the country.

By then barely into her 20s, Skye was still evolving. She spent the next few years touring and hiring herself out as a back-up singer. She collaborated with Americana artist Paul Woolner (singing as well playing mandolin and piano) and played trombone with reggae-rock band Rebel Emergency when it opened for reggae legends Toots and the Maytals in 2011. She also studied classical voice at Toronto’s Royal Conservatory of Music.

Ready to record her second solo album, Skye knew what she had to do. “I wanted to get back to playing my guitar with a band,” she says. “A girl and her guitar; those are my roots and it’s at the core of most of Wishing Tree.”

Working with producers Kosowski and Rogers, Skye has created a synthesis of pop, rock and folk anchored by her strong songwriting and winsome voice, which can range from a lush alto to a crystalline soprano. She wrote many of the songs at her parent’s bookstore, now located in rural Williamsford, Ontario, on an out-of-tune Mason & Risch upright piano.

There are collaborations with other writers. Mavillette was co-written in French with Franco-Ontarian musician (and former CANO guitarist) Marcel Aymar. Grain of Sand, a dreamy ballad co-written with singer-songwriter Emma-Lee, features a powerful chorus in which Skye’s voice dips into its rich lower register as she sings, “Don’t pinch me/I know I’m dreaming/You can’t drag me back without kicking and screaming…”

Although united by Skye’s artistic vision, there’s a diversity to the tracks, ranging from the tongue-in-cheek, country-flavoured Pull Me In and the bouncy ukulele ditty, Window Seat, to the compressed vocals and psychedelic organ solo on I Want My Money Back.

The title song, which has a Paris café-style ambience – it sounds as though it could have been part of the soundtrack to the Oscar-nominated romantic comedy, Amélie – evokes the image of a tree that, according to spiritual custom, will fulfill wishes when believers leave coins, cloth or other offerings. It was, for Skye, all about hopes, wishes and longings being expressed. Could there be a better symbol for the album, Wishing Tree?

“When I heard the final mix of the song Wishing Tree with the string arrangement, it made me want to cry,” she says. “Musically and emotionally it was everything I could have wanted for this album.”