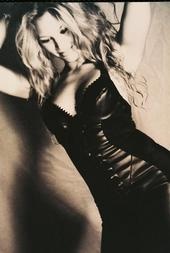 From time to time a true creative spirit is delivered to us. Rising from the froth of the sea of automatons that typically pollute American arts and culture where the red tide of generic mush is more the body of the ocean than a seasonal occurance, a true original will grace us with something new, ready or not. Born in Jackson Heights in Queens, NY, Laurie Ann Fessler was given to us for just such a high purpose. , A natural singer with a rich voice, Laurie Ann does not fit the narrow stereotypes that suffocate modern music; her writing floats freely from country and folk to an edgy soul and rock influence. Although such combinations are rarely prescribed by the lords of industry, a quick conversation with her will betray that she simply does not give a damn. She sings the songs that swell up and burst from her heart and could care less what those with less creative vision might think of it. Although very much a traditional New Yorker, Laurie Ann's path in life took her to Nashville, TN. Quick attention and praise fell at her feet; she was asked to contribute vocals to India Arie's Motown Records album "Testimony: Vol. 1 Life & Relationships" on a cover of "The Heart of the Matter" by Don Henley. Her voice, broad with character felt oddly comfortable on a Motown record, yet remains uniquely compatible with the folksy country atmosphere of Nashville, TN. All of this from a vagabond soul who grew up in the shadow of the World Trade Center. Relentless requests from fans inspired her to independently release her "La La Land" LP online. Grassroots demands for her recordings, autographed photographs, and other mementos are difficult for her to satisfy with limited time in a day. A recent review of her LP expressed, "It is very seldom that music comes across our desk here at Roots Music Report that has a fresh unique sound that creates a genre of its own. But Laurie Ann has just released a new Album 'La La Land' that has done just that. Laurie's vocal performances are powerful and her style is unlike any artists[sic] that are familiar to us." Expect to see great things from Laurie Ann; her golden voice is her sword and shield in the battle for a better life for her family, but on her terms. The buzz grows from the street with each passing day. We are only blessed with a limited number of truly creative spirits who have the courage to defy the homogenation that stunts our artistic growth as a people, while having the talent to make that rebellious energy sound great. This woman has a sound no single city can claim alone, no genre can inprison, and no music fan can resist.