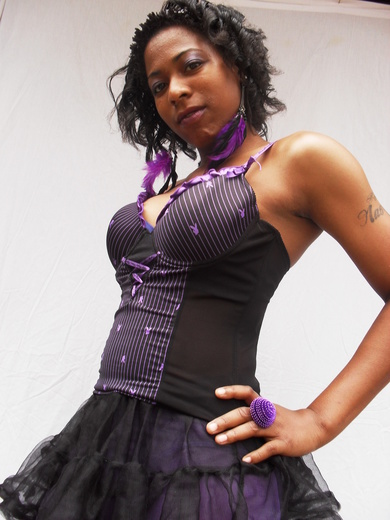 Stage Name: Mookie
Real Name: Daneekua Davidson
D.O.B: April 3, 1990
Born in Poughkeepsie, NY, Mookie always knew that music was in her blood. As a child, she would beat on every door, table, and object around just to hear a beat. At about 14, she realized that she had taken a strong liking to poetry. It wasn’t until the Christmas of 04, that she realized that music was her truest passion. Starting off with a boom box, karaoke machine, and Yamaha keyboard, she would rush home just to write a new track. In 2005, she discovered a way to bring her music to life, a studio at a high school she attended. Very reluctant about how people would react to her song, she started letting people listen to it. “How to Work”, although a very non- lyrical song was a hit to many at the small school, and that made her want to do more. She then decided to work on her first album, “Underground Beast”. In late 2006 she dropped her second album, “Mark of the Beast”, revealing herself as a troubled child with something to say. A beef with a certain unnamed artist showed Mookie that she had to make a name for herself, so in early 2007, she begin dropping tracks titled, “Truly the best, Fiyar, and Fresh Stuntin”. After a falling out with a group that she was with, she decided to reevaluate her swag and do it on her own. In 2008 she released “Criminal” amongst other songs, and they were an instant success over the internet. She began doing research and ultimately decided that she was going to put forth as much effort as it took to make it big. When asked why she does music and what makes her different, she responded by stating, “I get a certain feeling in my stomach every time I do a song. My music comes from my heart and that’s the realest music you can find. It’s not about the money or fans, I make music for me and that’s what sets me apart from every other artist. I might dedicate a few songs to my haters and fans but at the end of the day, it’s just a way for me to express myself.”