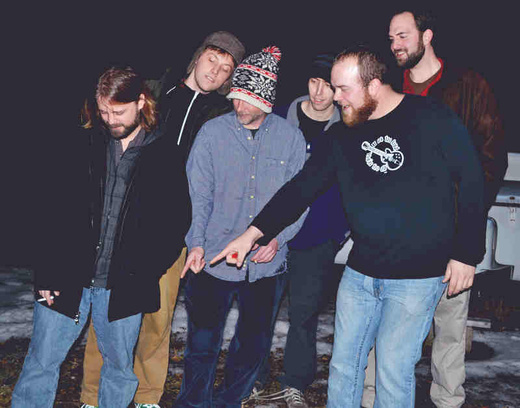 Started in 2003 by founding members Adam Vilmont and Kevin (K-Dogg) Wulf, Orangadang!’s early focus was on acoustic jams and storytelling songs. In January 2005 Michael Brock rounded out the group adding percussion (after previously playing with Adam in The We're Crazy Band). Nick Vasquez introduced his various talents to the group in 2006-7 playing guitar, bass, keyboards and vocals.

Leif Rhenberg became Orangadang!'s first drummer in 2009, but had to back out due to various commitments In the summer of 2010 drummer Zac Tatum joined the band and brought his various rhythmic talents and influences to the group. Kevin Molloy of The Perpetuals filled in on bass guitar for a spell in 2010 before leading the group to current bassist mainstay Luke Thiele.

Adam, K-Dogg, Brock, Nick, Luke, Leif and Zac hit the studio in November 2010 to begin recording the first Orangadang album. These ten tracks are currently (06-2011) being revisited and mastered for an upcoming independent release.

Unfortunately, merely two days after recording, drummer and sea-man Zac Tatum shipped out...no, not to war, but rather to rock the socks off of passengers on Carnival cruise lines. Once again, Leif became our primary drummer. With tears in all our eyes, Zac promised to return in 7 months to rejoin the 'Dang at which time a dual drummer-three person rhythmic machine will drive the backbone of Orangadang! Rock once more.

In May 2011, Orangadang! was thrilled to welcome (and brutally haze) keyboardist Daniel Kelly, of Patio, Tasty Trigger and Bacon fame into the fold to help fill the void oft-times left in Orangadang!'s soul when Nick Vasquez's very full musical plate (Candymakers, Nick and the don’t hey Donna's, various musical hostings) leaves little room for practices and gigs. We are pleased to announce Gordon Pickering as our new bass player in 2012 as Luke has moved on to bigger and brighter things in Omaha, Nebraska, no, seriously. We will miss Luke and welcome Gordon to the family.

Many pieces, One rock....together, we hold aloft our magical instruments and repeat the phrase, "By the Power of Greyskull, we are ORANGADANG!"
...then we kick your ear drum's asses….but in a good way.