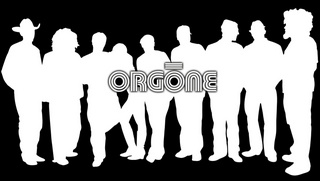 or·gone  (ôr'gōn)
n.  A universal life force, a cosmic unit of energy, the creative force in nature.
Los Angeles based band Orgone is many souls with a cosmic connection, a natural creative force and musicians who have played together for years. They are self schooled and continue to shape their musical voice as a solid unit of guys who hang, spin records and jam out their shared inspirations. With a rooted sense of funk, soul, afrobeat, deep rhythms and an intimate understanding of dj culture as well as each others' individual talents, Orgone seamlessly slides through multiple styles and dynamic performances. The group continuously injects whatever they play with a heavy brand of raw funk power.
At the core of the band is a rhythm section comprised of close friends who have played together for more than 10 years. Having grown artistically as a unit they function as one organic and intuitive whole. The orginal 5-member band started out by putting their own gritty takes on tunes by the likes of the JBs, the Meters, Booker T. and the MGs, Grant Green and Funkadelic among many others. They quickly gained underground respect and die hard fans. With their searing live sets and original instrumentals, Orgone soon released their debut self titled CD, "Orgone," in 2002. The result was a collection of all original down home, transcendental, tough and gritty funk instrumentals.
The band fast grew to include a powerful three-piece horn section and a fiery soul singer who all shared the same spirit and deep reverence for the music that inspired them. Singer, Fanny Franklin, joined the groups’ recordings after they were floored seeing her perform with Dakah, the 30-piece hip hop orchestra, and asked her to record with them. Their first recording together, Orgone's cover of “Funky Nassau”, became a ubiquitous DJ fave worldwide- first appearing on 7"(Nuff Rope) and then getting a 12" club re-edit by renowned dj Danny Krivit (Nuff Rope). It then appeared on Ubiquity's Rewind Volume 4 comp, which began the band's relationship with the prestigious label.
Gaining worldwide recognition for their raw studio recordings and exciting live sets led to the release of "The Killion Floor" on Ubiquity records- a full length album of hard hitting afro-soul & funk from the 9 piece band. While enjoying comparisons to classic acts like Rufus, War & Mandrill, or modern funk staples like Sharon Jones or Breakestra, they’re quick to point out that Orgone is unique.
“We draw from a wide musical and production palette ... it’s a reflection of the music and production aesthetics that we love.”
Orgone backs this up by taking the listener on a musical journey from the sound of Los Angeles to horn and percussion driven Lagos to a New York club and to the raw sounds of New Orleans. The title of the album "The Killion Floor" is derived from the Orgone apartment/studio facility where the majority of the album was recorded. Singer Franklin delivers monster performances on tracks like the Memphis-drenched “Who Knows Who,” the laid-back and cosmic “Said and Done,” and the apocalyptic sound of “Do Your Thing". The album also features guest appearances by singer Noelle Scaggs (from the Rebirth), trumpeter/arranger Todd Simon (Dapkings, Antibalas, CPK, Breakestra), and guitarist/producer Dan Ubick (CPK/ Lions).
The band’s reputation amongst the funk, soul, and hip hop fraternity is further backed-up by an impressive and ever growing resume that expands their reach. This includes a spot in an Adidas campaign, a tour with and backing band for Bun B(from UGK), Pharoahe Monch, Plantlife (including a BBC performance for Jools Holland), Little Brother, Nice and Smooth, Black Sheep and New Orleans funk legend Eddie Bo at a Hurricane Katrina benefit. Members of Orgone also have featured in the make-up of Ubiquity acts the Lions, Connie Price and the Keystones, Breakestra, and have performed with the Pharcyde, De La Soul, Too Short, Macy Gray among many others. To top it off, most of the group can be heard on recent major recordings by Alicia Keys, Estelle, Anthony Hamilton, Jennifer Hudson, Solange Knowles and many other R&B/Soul artists.
Orgone continues to tour, impressing audiences and winning new fans at festivals & clubs nationally and overseas. 2009 saw the release of their second fully independent CD "bacano", a collection of all original cold-blooded funk gems representing what's always been going down in Orgone's funky, sweaty home-grown recording spot. It's a recorded history of the band and its musical family throwing down: check the lethal neck-busting bass intro of founding member Tim Glum on "You Already Doin It", the Detroit thump of bassist Dale Jennings on the deep hypnotic funk soundscape of "Vibromeyer", the dance floor soul of singer Gino Garafalo on the undeniably hip-shaking "Come Around" and the sub-atomic gut punch of Orgone bassist Ethan Phillips on the heavy psychedelic groove of "Hott Karl".
Orgone live and recorded is 100% organic heart and soul an aesthetic and an attitude born out of half a lifetime of playing together.

RELIX magazine ": ...an ultra-funky intertwining of infectious grooves with melodic phrases, even when they are at their most experimental. Despite the music’s complexity, it remains uncluttered and spacious...If you are into classic funk like Parliament Funkadelic, the Meters ...you should find Orgone intoxicating. In addition to the funk, R&B and jazz elements, the band exhibits an adventurous rock ‘n’ roll twist...This is one hell of a band."
“Their music is terrifically unfussy, big slabs of grizzled R&B, greasy as fatback and thick as a very particular kind of smoke. At their best, they recall the majesty of Sly & the Family Stone; opening track “Who Knows Who” is all bleary horns and broken-heart vocals, “It’s What You Do” is a tight, itchy jam. There’s still a riot goin’ on, and Orgone is at the front of the crowd.”
- eMusic
"L.A.’s Orgone keeps the hotness of the recent retro-soul revival coming; lead singer Fanny Franklin fits in very nicely between Sharon Jones and Amy Winehouse. As befits the band’s name, Orgone’s sound is quite organic, rooted in soul, funk, boogaloo, and jazz, with a classic appeal that’s nevertheless contemporary...the entire album is one non-stop groove. If smooth, soulful funk with jazzy arrangements makes you sweat, you just found your new favorite band."
- XLR8R
"Orgone has provided all the elemental power to drive the funk/soul revival to new levels with The Killion Floor...Orgone will invigorate your groove spirit and get booty out of its little box and out on the dance floor."- KEXP, 90.3FM (SEATTLE)

"By the time the listener gets to the nasty, distorted, finger-popping, ass waggling "Crabby Ali" -- where the deep brewed, second-line New Orleans old-school funk goes head to head with the gloss of L.A.'s Tower of Power styled horn charts -- it feels like the party's just getting started."

- All Music
A monstrous debut from one of the heaviest acts we've heard in years -- LA's Orgone, easily one of the most up-and-coming funky combos around! Although Orgone share a bit with some of the leaner deep funk groups who've cropped up in the past decade or so, they've also got a sound that's a bit more advanced overall -- sort of that second-generation approach to funk that hit the scene by the mid 70s, as some of the bigger funk acts like Black Heat or War moved out of the indie scene and really started to hit a wider audience! That doesn't mean that Orgone's commercial at all -- because they've got a sound that's still as sharp-edged as any smaller group -- but with a lineup that's quite large, they're able to encompass a very wide range of soulful styles -- gritty 45 riffing, slinky Chicano-styled grooves, Afro Funk, tighter soul tracks, and lots lots more -- all carried off with perfection throughout. The album feels like some lost masterpiece on Fantasy, or possibly some overlooked early 70s major label funk set on WEA or United Artists -- and titles include "Who Knows Who", "I Get Lifted", "Funky Nassau", "Lone Ranger", "Prism Break", "Crabby Ali", "Duck & Cover", "Dialed Up", "Said & Done", "Hambone", "It's What You Do", "Do Your Thing", and "Sophisticated Honky".
- © Dusty Groove America, Inc.